Media: Germany does not rule out a criminal cause of failure of the liner Merkel

TASS, 30 November — At the same time, as reported by the newspaper Rheinische Post, the investigation will go “in all directions”. 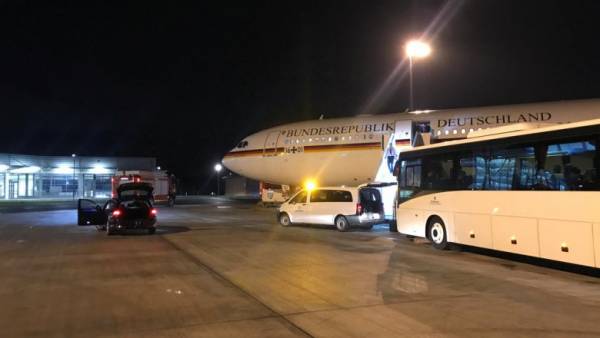 The German government believes that the failure of the aircraft, the Chancellor of the country Angela Merkel could have a criminal trail. On Friday told the newspaper Rheinische Post, citing sources in the security agencies of Germany.

According to the publication, the incident will initially be regarded as “criminal”. In the security agencies said that the investigation will continue “in all directions”.

As emphasized by the publication, such a failure is unprecedented. Despite the fact that the plane was not far from Amsterdam, the plane had to fly to the airport Cologne due to the fact that in this refusal the runway for landing airport in Amsterdam was long enough. In addition, there were concerns that the mechanism of the landing gear of government aircraft may not work.

Thursday because of a technical defect in the government liner Merkel was forced to interrupt the flight to Buenos Aires for the summit of “Big twenty”. The flight of the Chancellor lasted about an hour, when the sky over the Netherlands, the crew decided to turn back to Germany. The Airbus A340 Konrad Adenauer landed safely in Cologne.

This is not the first incident with a government plane, Germany. Recently, because of his failure to President Frank-Walter Steinmeier had to stay late with departure. In March last year, Merkel’s plane broke down before departure to Egypt.