Moscow. 27 Nov. INTERFAX.RU foreign Minister of Austria Karin Kneissl on Tuesday admitted the possibility that, depending on the results of the analysis of the incident between Russia and Ukraine, the EU will consider the issue of strengthening sanctions against Russia. About it reports Bloomberg. 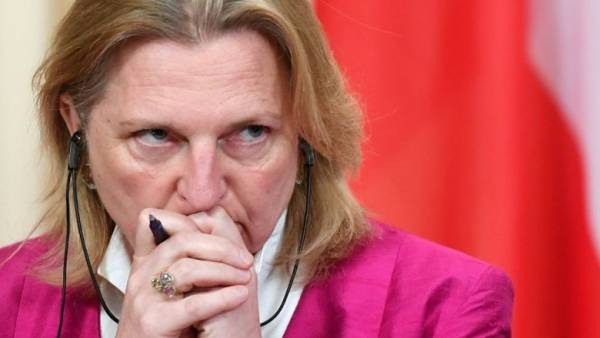 “We are going to consider issue of further sanctions. It all depends on examination of the facts”, — quotes Agency the words of Kneissl, said after a meeting with the foreign Minister of Germany Heiko Maas.

She said that we are talking about verifiable facts pertaining to the incident between Russia and Ukraine in the Kerch Strait.

Kneissl added that this issue will be discussed at the next meeting of foreign Ministers of the EU countries.

25 November in the area of the Kerch Strait, the Russian border guards with weapons detained three ships of the Ukrainian Navy bound for the sea of Azov. Three Ukrainian sailor was wounded. In connection with the incident in Russia, a criminal case under part 3 of article 322 of the Criminal code of Russian Federation (illegal crossing of the state border).