Medvedev commented on the introduction of martial law in Ukraine

MINSK, Nov 27 — RIA Novosti. The introduction of martial law in Ukraine in some areas of the country after the incident in the Kerch Strait gives the opportunity to the Kiev authorities to “Flex its muscles”, or in 2019 to abandon the election of the President, said Prime Minister Dmitry Medvedev. 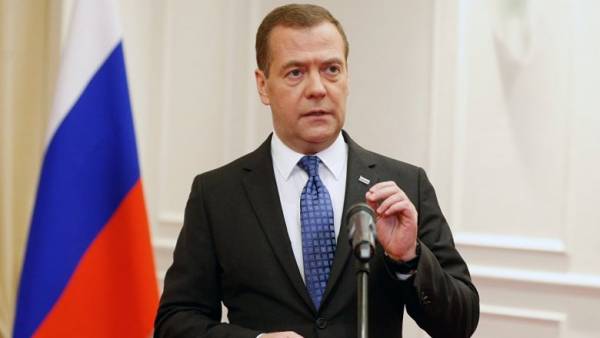 “The introduction of this martial law, which gives the possibility of the current government at least a little to Flex its muscles, to increase support from the population is one of the possible options. But, as may be the maximum option to be considered, I mean simply a rejection of the elections”, — said Medvedev told reporters. He noted that similar predictions a year ago was made by Ukrainian intelligence.

Medvedev in Belarus assessed the chances of Poroshenko in the elections of the President of Ukraine: to win the odds are low, even in the second round pic.twitter.com/U7aKYl7Qqn

means That the introduction of martial law in Ukraine

The Russian Prime Minister noted that in this situation also draws attention to the reaction of the Ukrainian public and political figures.

“Noteworthy is the reaction of the Ukrainian establishment, the Ukrainian political figures, including former presidents, which asked, in General, it is, in my opinion, the obvious question: why in much more complex situations, in which the fall of the Ukrainian state, the military situation was not introduced, and the incident was used as a basis for the introduction of such provisions,” — said Medvedev.

The Verkhovna Rada of Ukraine on Monday approved a decree Poroshenko on the introduction of martial law in some areas of the country for 30 days, after the Ukrainian Navy ships violated the border of Russia in the Black sea and was detained by Russian ships. Initially, Poroshenko proposed to introduce martial law throughout Ukraine for 60 days, late by 30 days in order to avoid disruption of the presidential elections on 31 March 2019.