MOSCOW, 27 Nov — RIA Novosti. Vladimir Putin held at the initiative of the German side of a telephone conversation with Chancellor Angela Merkel, discussed the incident in the Black sea, reported the press service of the President of Russia. 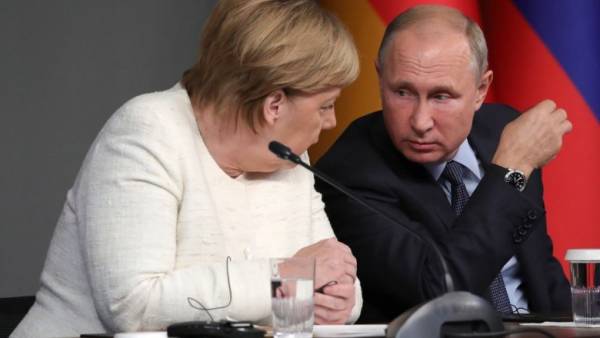 “They discussed the threat the incident that occurred on 25 November in Azovo-the black sea water area. Vladimir Putin gave an assessment of the provocative actions of the Ukrainian side, the gross violation of international law by its military ships, deliberately ignoring the rule of innocent passage in the territorial sea of the Russian Federation”, — stated in the message.

Added that “expressed serious concern in respect of decisions of Kiev on the reduction of its armed forces in full combat readiness and the Declaration of martial law”. In addition, accented that the Ukrainian leadership bears full responsibility for the creation of another conflict situation and the related risks.

“Obviously, it’s taken the election campaign in Ukraine”, — stated in the message.

In addition, Putin expressed hope that Berlin will have an impact on the Ukrainian authorities to keep them from further rash steps. Noted that representatives of the Russian Border guard service will be ready to give additional explanations about how to develop these events in the Kerch Strait.

The incident in the Azov sea

On Sunday morning, the ships of the Ukrainian Navy “Berdyansk”, “Nikopol” and “Yana Kapu”, violated articles 19 and 21 of the UN Convention on the law of the sea, crossed the state border of Russia. They came in temporarily closed the Russian waters, and for several hours carried out dangerous maneuvers, not responding to the demands accompanying the Russian boats and ships.