Wedding loan: why do the Russians get married a loan and what that leads to

More and more Russians go bankrupt due to loans taken for the wedding. Russian service Bi-bi-si have traced the path from the Banquet with fireworks to threats of collectors and inventory of the property. 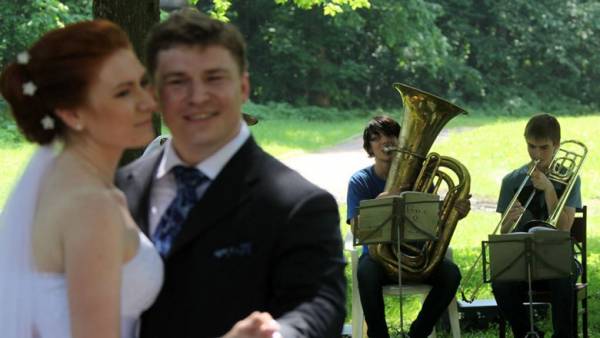 In 2015 in St.-Petersburg Dmitry Temples, a land-surveyor with a salary of about 50 thousand rubles, proposed to his girlfriend and decided to play a good wedding — the first and, as he still hoped, only.

On the occasion of the Temples (name changed at his request) borrowed from friends 700 thousand rubles, and then took out a loan to pay the debt. “I wanted a very exclusive event to celebrate, push the boat out,” he explains.

“It’s an addiction. It’s worse than a casino”

Rented Banquet hall Le Glamour on Voznesensky Prospekt, where they filmed the video for the song “Woman, I don’t dance”.

Among the 35 guests — relatives of the bride from the Far East. Two photographers, the first 5 thousand rubles, the second — 15 thousand (first shot better). The most expensive was a Banquet: “As without slides, fireworks, a cake, boats, bubbles”. The fish on the boat. Fireworks. The exit sign in Pavlovsk with palaces and horses.

— There are different horses that could take in fifteen thousand hours, you can take five…

— Did you get for fifteen?

I’m a fool, but not so. But there were other nuances. The decorations on the horse. And the horse, and that it should spur it on purpose. Three blows with a whip was worth about a thousand rubles. But I’m so close to snapping… And the horses themselves were honoured that the hard stunts in the movie did.

For newlyweds horseback riding such horses specially brought in Pavlovsk. It cost about 50 thousand rubles — month earnings Khramov. “The wedding was perfect, in my opinion,” he recalls.

Began working days. Temples moved to a new job with a salary smaller, but with growth prospects. And the wife after many attempts got pregnant. She worked in the infectious diseases hospital, so I immediately went on maternity leave.

It turned out that I was paying her for the “gray” scheme, and maternity leave payments were limited to seven thousand rubles.

After the birth of a child company, where he worked as Churches, lost their main customer, and the surveyor was fired.

For rent apartments Churches had to pay 25 thousand a month for credit wedding Bank 40 thousand.

Diapers, medicines, pay doctors ‘ visits. “Almost three months, I was a little dazed, sat up and looked at the wall. Then spun as I could. Bride-price, he recalls. — Came in the suburban areas and suggested measurement of the land cadastre. When I went overdue, I was already quite nervyak. So in 2017 began fines, calls his wife and my history with the MFI” (microfinance institution).

First went to “big, solid” — for almost a year took 70 000 under 80% per annum. They closed their delay. “At first relieved, and then sat down and think: damn, but next month again the same amount will be needed, says of the Temples. — Figured that I have.”

“They really brought”: the Vologda region became the capital of personal bankruptcies

Decided to lay the car, a Volkswagen Jetta, which also bought on credit, but has already closed its money from the “wedding” of credit: “Laid, and then realized that this is again the percent count is the same MFIs”.

Temples then went on the “small benches”, crediting of 5 thousand rubles. And for rent apartments and for hot water, he was paying payday loans. Each time he was offered more and more loans, paying no attention to bad credit history.

“We have only said that their check up. I talk on the phone — you know, my income is small. And they suggest — well, you specify that the ninety thousand in the questionnaire. Which they like as check on,” recalls the Temples.

All it took microcredit online: application on website, call-confirm — and the money comes to the card.

It is an addiction. It’s worse than a casino. I initially had plans on how I’ll get a job and pay that tomorrow I will go there, earn and give that to those guys, and the day after loan from their parents, ask for grace from others. Then it all rushed, and full plate.

Desperate to make money, he began to bet on sports. But this led only to greater debt.

From April to September 2018, he gave an MFI of about 650 thousand rubles: “I tried to pay, the moral burden has not been canceled. But there comes a point when you realize that give you no way”. Calls from MFIs to go and pertinate gave way to calls of collectors, with screams and threats in the spirit: “Tomorrow we are going to batter all of your colleagues and neighbors.”

Called a friend. The temples took a new job (retrained to IT Manager), and called his new boss “six times in two nights.”

Call colleagues, which of the Temples have not even seen: “Recently from our branch in Moscow called: Hey, dude, you debt is not going to give? And then I’ve got another call. Girls see acquaintances in the corridor and say, Dmitry, we today have with your manifold from Krasnodar talking. Can make at least the night didn’t call?”.

“Sitting at work afraid to leave the office, ashamed. My hands this month which is shaking. And I understand people who at this moment run reborrow anywhere. But it’s pointless. This begs the idea of only one bankruptcy,” says Temples.

Sequoia could not resist

This idea gave him a mother. “For some reason, all come to this, when it is cornered. But you used to be. Most prevents shame. Prevented me stupid, I believed that it is possible to get, thought will be able to close, left to step it up,” he recalls.

Meeting of the court on recognizing his bankruptcy he’s waiting at the end of November. Credits do not want to take: “I don’t want to even look at these signs on the streets. The word “credit” makes me want to get into a fight.”

As we speak, in messenger WhatsApp Temple writes another debt collector. In profile he has a picture of a Soviet serial killer Andrei Chikatilo, he’s threatening to send photos of his wife Khramova on social networks.

About loans in MFIs husband didn’t tell her until the last. When she found out about the financial collapse of her husband, then Packed up and left.

But we talk, I try to see. It will get better.

— Who would be so celebrated the wedding?

— No. But now I would have nothing to celebrate.

But, as a rule, such a loan does not have a separate marking, so to calculate exactly how many wedding parties in Russia was paid in a loan is impossible.

Some banks — for example, Alfa-Bank and Citibank offer loan for the wedding as a separate service. Love offered from 50 thousand to 3 million rubles under 12-25% per annum, depending on the reliability of the borrower, to the ads on the websites of the banks.

To know exactly what part of the borrowers is unable to cope with debts for the wedding, is difficult. In cases of bankruptcy of physical persons, the materials of which are on the website of the Arbitration court of Russia, reference to the loans to the celebration meeting. And in each of the 20 legal offices in nine regions of Russia, which asked the Russian service Bi-bi-si for comments, there were clients who become bankrupt due to problems including with wedding loans.

But to talk with reporters they don’t want — most often in the answers with a refusal to interview see the words “hard” and “shame.” “Nobody wants to put this history on display, even anonymously,” the shrug of the lawyers.

The law on bankruptcy of natural persons gained in Russia in 2015. Borrowers talked about it as the panacea, but in fact the first year came only the most desperate, says lawyer Kombarov.

One of the reasons that keeps people from going bankrupt, is the reaction of neighbors and colleagues. We are not America where the President can be a multiple bankrupt. In the eyes of our society is the con man who took out a loan from the Bank and didn’t give it.colleagues Komarovoj

According to United credit Bureau in 2018, in Russia on average go bankrupt 45 people out of 100 thousand. After the bankruptcy of the former debtor to take all Bank cards, close all accounts required transactions engaged by a financial Manager.

The debtor leave a single housing, it has a stove, refrigerator, pots, a bed and clothes (if warm there is only a mink coat and leave it). Chickens, pigs and sheep along with the farmyard if the bankrupt’s eating them, not selling. Seeds for a vegetable garden, firewood and products — about 5000 rubles. Do not take icons and sports awards. Leave the tools for the job, if they are cheaper than the million — laptop, if earnings is associated with a set of text, or a violin, if its owner a musician.

According to Rosstat, more than half of marriages in Russia end in divorce. In 2017 for a million marriages had 611 000 partings.