MOSCOW, November 25 — RIA Novosti. Three ships of the Ukrainian Navy, released from Berdyansk in the direction of the Kerch Strait, come back, reported the public relations Center of the FSB. 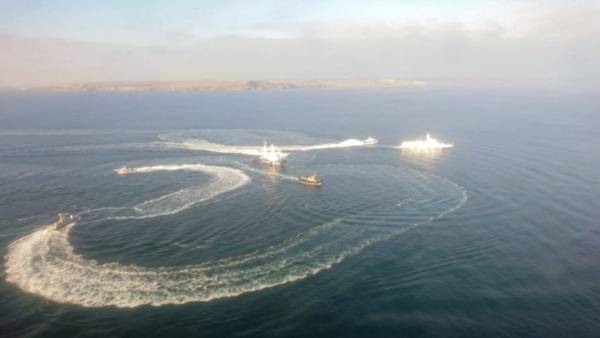 The Agency also told about the irrefutable evidence of preparation and holding of the Kiev provocation in the black sea water area.

“These materials will soon be made public”, — is spoken in the message of the FSB.

On Sunday morning, three Ukrainian ship violated the Russian border and went to the Kerch Strait. A few hours later from Berdyansk moved two armored artillery ship class “Viper”. In response to the provocative actions of the Russian military boats and the cargo ship blocked access of the Strait, and the su-25 began patrolling the airspace.

As reported in the Crimean border guard service, the vessels of the Ukrainian Navy was performing dangerous maneuvers and ignored the legitimate demands of the Russian side.

The Crimean authorities have seen in the actions of the Ukrainian side in the interests of the United States. According to the head of the Republican Parliament Vladimir Konstantinov, provocations off the coast of the Peninsula is Washington, which intends to draw Moscow into the conflict.

The head of the Crimea Sergey Aksenov also said that Ukraine could provoke at the direction of “Western masters”. He recalled that in recent times the European and American politicians it is no coincidence actively discussed the situation in the Azov sea.