Nearly 150 black dolphins beached on the coast of New Zealand

145 pilot whales were killed by jumping to the shore of Stewart island in New Zealand. According to environmentalists, to save the animals was impossible. 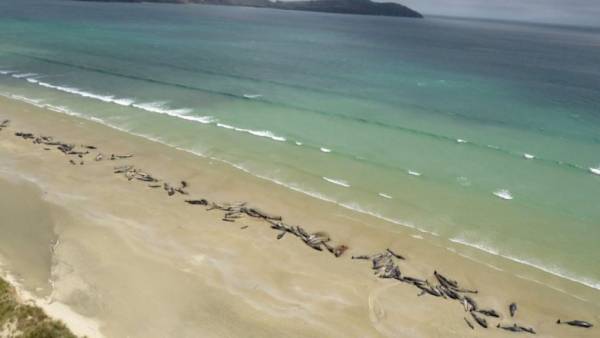 The animals on Sunday evening was found by a local resident walking down the beach along the Gulf of Mason. According to local authorities, to the point where on the shore was found a flock of black dolphins, half of the animals had died.

Others have not been able to save, including because animals beached on a remote from the major settlements areas. The reasons for this behavior of dolphins is not clear. Last weekend on the coast of New Zealand jumped another 12 dwarf sperm whales and one 15-metre sperm whale.

As it turned out, on the coast of new Zealand Stewart island jumped two flocks of black dolphins — they were at a distance of approximately 2 km from each other.

Unfortunately, the chances of saving the animals were extremely slim. Remote areas, the lack of nearby specialists and the rapidly deteriorating condition of the animals — all this has forced us to make a decision about their slumber. This was the most humane that could be done.Ren Happentramadol the Department of prodinvest

Journalists a few days, watched death of a penguin broke down and intervened

As noted with regret in the Department, the cases where marine animals are thrown ashore in New Zealand frequent. Every year there is an average of about 85 such incidents. However, most often we are talking about one animal, but not an entire pack or two.

Scientists have no clear explanation for why dolphins and whales are thrown ashore. They suggest that this may be due to disease and loss of orientation, pursuit predator, tides and many other possible causes.