SIMFEROPOL, November 25. /TASS/. Three ships of the naval forces of Ukraine illegally crossed the state border of the Russian Federation, included in territorial waters and dangerous maneuvers, is spoken in the message of border guard of FSB of Russia in the Crimea. 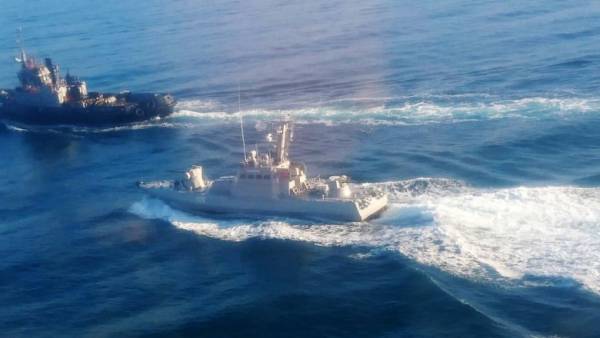 “This morning around 07:00 Moscow time three ships of naval forces of Ukraine in violation of articles 19 and 21 of the Convention United Nations law of the sea, defining the right of coastal States to ensure security in the Maritime space, crossed the State border of the Russian Federation illegally entered in the temporarily closed waters of the territorial sea of the Russian Federation. Ukrainian warships continue to move to the Kerch Strait, which operates the licensing procedure of navigation and stay of vessels in accordance with the schedule of ships ‘traffic and arrangement approved by the captain of the Russian sea port”, — stated in the message.

The Department also added that it has entered the territorial waters of the Russian Federation, Ukrainian Navy ships maneuvered dangerously and do not obey the requirements.

“Until now, the established procedure of the application is not submitted, the timetable of passage of ships is not included. The ships of the dangerous maneuvers and do not obey the lawful demands of the Russian authorities”, — stated in the message.

The border service is taking all measures to ensure the safety of navigation and regulation of vessel traffic in the waters of the Black, Azov seas and the Kerch Strait, the report States.