“Who does not listen to Lavrov, will listen Shoigu”. The foreign Ministry assessed the situation with the INF Treaty

GENEVA, November 23 — RIA Novosti, Elizabeth Isakov. Russia hopes that the USA will not take any hasty steps in connection with the Treaty on the elimination of intermediate and shorter-range missiles (INF Treaty), said RIA Novosti Director of the Department of foreign Affairs on non-proliferation and arms control Vladimir Ermakov. 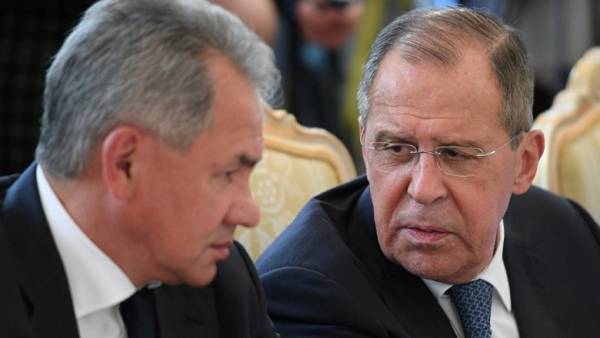 The Treaty on the elimination of intermediate-range and shorter-range agreement between the USSR and the USA, signed in 1987: the parties undertook to destroy all systems of ballistic and cruise missiles, ground-based medium (1000-5500 km) and smaller (500 to 1000 km) range, and not produce, not to test and not to deploy them in the future.

The twentieth of October the President of the United States Donald trump has threatened to withdraw from the INF Treaty, since Moscow, in his opinion, does not fulfill its obligations.

The White house stressed that Washington needs to build nuclear capabilities. He noted that this will occur as long as the others “comes to her senses”. After that, the United States will be ready to stop this process and even to proceed to arms reduction.

He explained that this message is addressed primarily to China and Russia.

Moscow has stated that it will respond to a mirror in the case of the supply of new U.S. missiles in Europe. According to Vladimir Putin, the countries agree to place the weapons the United States should understand that put their territory under the threat of possible retaliation.

The Kremlin has repeatedly stressed that Moscow has serious questions to Washington concerning the implementation of the Treaty by the Americans themselves. In particular, Russia indicates that the United States placed on land at a military base in Romania, and in Poland — a facility capable of launching a shock cruise missiles of type “Tomahawk”, and is prohibited by the Treaty. In addition, the United States is developing unmanned fighting vehicles, and Fund research on creation of cruise missiles, land-based.