Expert: the new format of the state Council of the Russian Federation allows to discuss Federal policy with the regions

According to the Director of the Institute of the newest States Alexey Martynov, the new format was “a different view of the system of public administration”. 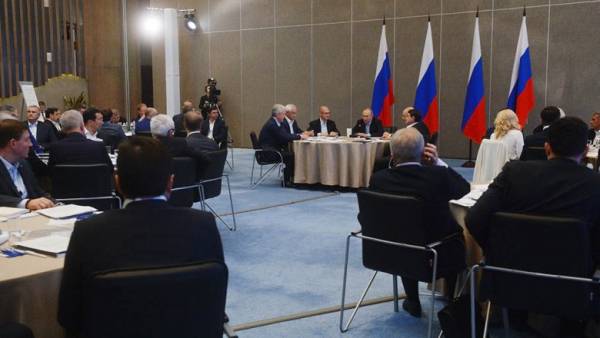 MOSCOW, November 23. /TASS/. The new format of an extended meeting of the Presidium of the State Council of the Russian Federation makes it a platform for discussing Federal policies with regional participation. This opinion was expressed in an interview with TASS on Friday, the Director of the Institute of the newest States Alexey Martynov.

November 23, held an enlarged meeting of the Presidium of RF State Council dedicated to the execution of may orders of the President of Russia Vladimir Putin. Speaking during the meeting, the President noted that he expects real results of the implementation of national projects, and encouraged to make changes reached each person. The meeting was held for the seven thematic round tables, which focused, in particular, demography and health, science and education, housing and the urban environment, ecology and the digital economy, infrastructure. In each of the discussions were attended by relevant Deputy Ministers and heads of regions.

It is important to note that the new approach makes the state Council platform to discuss Federal policy with the regions. Almost Federal office involved regional leaders. This is a completely new approach, and, in my opinion, it allows you to involve the regions in the system of governance at the Federal level.Alex Martynovichi Institute of the newest States

He recalled that on the eve of the General meeting held a few panel discussions with the participation of regional leaders and experts.

According to Martynov, the new format was “a different view of the system of public administration”. “On the one hand — optimization, on the other hand, the strengthening of state control when all participate in running the country,” he said.