Poroshenko was accused of secret meetings with the godfather of Putin

The Ukrainian President at home secretly met with Putin’s godfather Victor Medvedchuk on the eve of the introduction of Russia’s anti-Ukrainian sanctions. The employees of the state tried to hide the facts of meetings with politicians from journalists. The level of influence Medvedchuk correspondents described as an “informal Ambassador of Russia in Ukraine”. 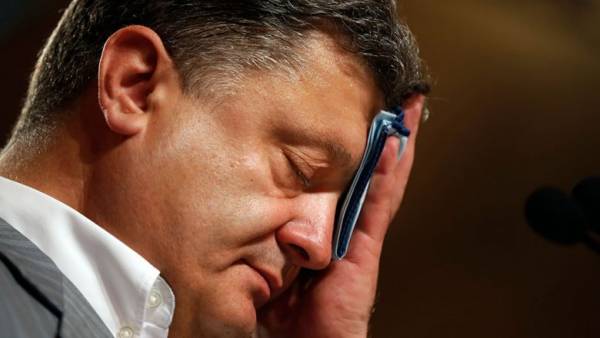 The President of Ukraine Petro Poroshenko holds regular secret meetings with the godfather of Russian President Vladimir Putin and the leader of the public movement “the Ukrainian choice” Viktor Medvedchuk. This is stated in the investigation of journalists of the program “Schemes”, a joint project of Radio Liberty and “UA:First.”

During the four months observation of visitors President, the journalists noticed that Medvedchuk regularly comes to the Poroshenko administration.

“On the eve of the introduction of Russia’s sanctions against the Ukrainian citizens and companies (1 November this year — approx. “Of the tape.ru”), Poroshenko and Medvedchuk met at least twice — in the presidential administration and the house of the President”, — is spoken in the investigation.

Journalists suggest that policies agreed on the composition of the sanctions list.

It is noted that car motorcade Medvedchuk’s first openly parked near the administration buildings and the house Poroshenko. When the guards noticed surveillance of journalists, she began to resort to all sorts of tricks to hide the facts of meetings between the two politicians. Journalists let the police and the state security Department, which routinely stopped the cars of reporters and had covered a tuple Medvedchuk.

In the investigation of Medvedchuk called a Pro-Russian politician. It is noted that in 2012-2013 the public movement “the Ukrainian choice” lobbied for the integration and development of economic relations of Ukraine with Russia. In 2014, the level of influence the journalists described as an “informal Ambassador of Russia in Ukraine”.

Reporters noted that Poroshenko in 2014, Medvedchuk was appointed a member of the subgroup on humanitarian issues in the framework of the trilateral contact group on settling the situation in Donbas, in which he was engaged in the exchange of prisoners. “I have to admit that the most effective was the Victor Medvedchuk” — spoke about his activities of Poroshenko.