After serving for the red and blue

On Thursday, the military counter-intelligence officers and Investigative Committee of Russia (TFR) was detained Mikhail Baryshev, who until recently headed the Main Directorate for work with personnel of the armed forces and Central army sports club (CSKA). Colonel suspected of involvement in a massive fraud and bribery in CSKA. The defendants in this investigation are already dozens of army sports officials accused of embezzlement of hundreds of millions of rubles charged for the preparation of athletes. 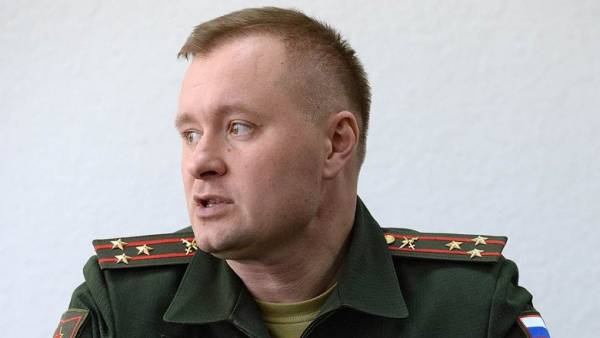 Criminal case No. 11802003305000064, the defendant eventually became Colonel Baryshev, was instituted may 17, 2018 investigator 517-th Moscow military investigation Department of the TFR in the grounds of a crime under part 4 of article 159 of the criminal code (fraud in especially large size). Then with him in the military investigation Department of the TFR in Moscow has joined at least nine criminal cases in summer and autumn in relation to former employees of Federal Autonomous institution, (FAU) of the Ministry of defence of CSKA.

Their figures, in particular, former Deputy chief of CSKA logistics Andrey Amazin, ex-head of automotive service, the FAA Yuriy Mukhanov, responsible for the tenders in the club Oleg Ampilogov and specialist management of sports facilities Svetlana Matveeva. He was charged with fraud and obtaining a multimillion-dollar kickbacks. According to investigators, the theft occurred over several years in preparation for various military competitions, which allocated hundreds of millions of rubles from the budget.

In addition, under investigation was the merchants who paid for participation in tenders and brokers, mostly former members of CSKA, through which bribes were transferred to the heads of army club.

Entrepreneurs, part of intermediaries and employees of the club went on to collaborate with law enforcement, thus, the investigation and got the dirt at first on Andrew Gamasina, and then at the Colonel Baryshev. According to some, Mr. Amazin began to cooperate after talking Yuriy Mukhanov, sent by the Basmanny district court under house arrest. Obviously provided by people from the entourage of Colonel Baryshev data and led to his immediate detention.

Kommersant’s sources say that the Colonel is charged with a few episodes under article 290 and article 159 of the criminal code, committed in preparation for the III world military winter games in Sochi in 2017.

In the near future the consequence is going to charge him and apply to the Moscow garrison military court with the request for his arrest.

To get comments from the representatives of Mr. Baryshev and other defendants in the investigation of the “y” failed. “B” also sent a request to the Department of the defense Ministry, but at the time of delivery rooms in print, the answer is not received.

According to “Kommersant”, Mr. Baryshev was to be the newly appointed Deputy chief of the Main military and political control Andrei Kartapolov. However, these plans were not realized due to criminal cases: his appointment in the Department specially set aside, as it was informed about the work of law enforcement. In the end, the first Deputy of the General Kartapolov was appointed Alexey Tsygankov, who worked as a Deputy mister Baryshev in the Main Directorate for work with personnel.

However, as told by interlocutors “” from an environment of mister Baryshev, for them his arrest was a complete surprise: “he had big plans to work in the office next.” Other interlocutor “” close to the defense Ministry, said that Mr. Baryshev no longer works for the Agency. “Outline the criminal case has nothing to do with the last post and the Ministry were all very surprised revealed details of his work in CSKA,” — said the source “b”.

Mikhail Baryshev graduated from the Tver Suvorov military school, Moscow higher combined-arms command school and the courses of the Military Academy of the General staff. From March 2012 to 2014 was a full-time employee of the Central apparatus of the Federal security service, from October 2014 to July 2017 held the position of chief of CSKA. In his interview to “Kommersant”, this soon after the appointment of the chief of head Department on work with personnel of the defense Ministry, Mikhail Baryshev said that had to do with building a new concept of training of the personnel.