A huge dust storm struck the South-Eastern regions of Australia. In New South Wales the sky was painted in orange color, visibility has sharply decreased and air pollution has reached hazardous level. 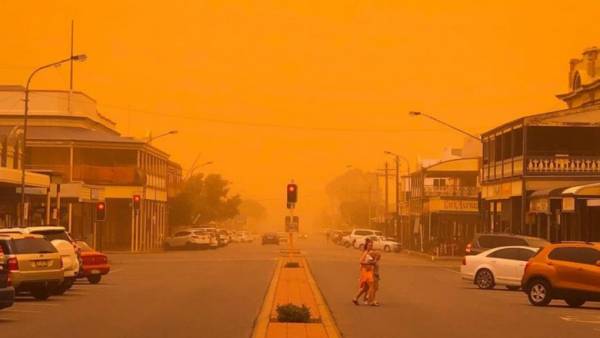 According to meteorologists, the storm was caused by strong winds, took to the air the dry land and sand. The situation is complicated by the fact that in New South Wales since August established dry weather. This winter in the East of Australia was almost no rain, and the fields have turned into parched land.

On Thursday, the state government of New South Wales issued an official warning for residents of Sydney in connection with the approaching dust storm, which covered a territory of 500 km, and Poor visibility delayed many flights from Sydney and in Sydney.

Dozens of residents of the state went to the doctors complaining of breathing problems, many exacerbated chronic respiratory diseases. The state government have not yet specified the number of applicants to the doctors.

The air in Sydney remains badly polluted. Doctors recommend as little as possible to be outdoors. This is especially true of children, the elderly and residents suffering from respiratory diseases.

One of the residents of the city of broken hill Matt Whitlam says the wind brought the dust did not abate for several hours.

“The wind was so strong that opening the car door, it was impossible to let go, otherwise she would be hit in the face,” says Matt Whitlam.

The current storm is compared to many of the dust storm that covered the East coast of Australia in September 2009. The storm became the strongest in New South Wales over the past 70 years. According to experts, during the peak of the storm, the Australian continent lost from the coast to 75 thousand tons of dust per hour.