Putin want to dress in military uniform to raise his rating

In the government are seriously discussing the idea to put the President, Ministers and the entire civil service in the uniforms or paramilitary form. Supporters of the idea believe that it will help solve the problem of power ratings, the sources of RTVI.

UPD. Press Secretary of the President Dmitry Peskov on a question RTVI said that the Kremlin had not heard about this initiative.

To see Vladimir Putin, dressed in military would like, for example, security forces. “The President is the commander in chief. He has a right to wear military uniform. If it is in certain cases will wear shoulder straps, all will benefit from this,” said RTVI source in the defense Ministry. Until now, stylists, Vladimir Putin advised him a variety of clothes. On formal occasions he appears in the clothing business style, the exercises, dressed in an army jacket, during his recent visit to Pskovo-Pechersky monastery Putin was in jeans and white sneakers.

The source in the defense Ministry explains that unlike the civil service, the rating of the army population is not falling, and this should be considered in the policy. Indeed, rankings of the military and the Church, according to the poll, hold the position. And the situation with all the major institutions of government and the President opposed.

The source in Ministry of defense says the army is the main structure, which in modern Russia is a “source state”. He noted that this opinion has supporters in various governments. According to the source, the form for the civil service — it is also a process of import substitution, because the Russian workers will sheathe officials, who refused expensive Italian suits.

Surrounded by Sergey Shoigu have traditionally supported the idea of expanding the army orders to all of society. And in the fall of ratings of government promotion of this theme can get a real incarnation. 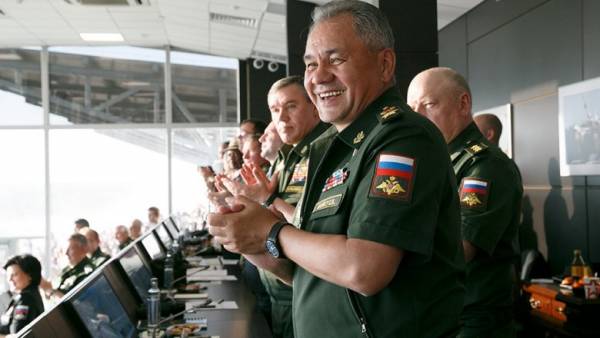 November 19, the state Duma Deputy Vitaly Milonov, known for his provocative statements, in fact, voiced the idea of the military. According to him, “the symbolism of social service” can positively affect the moral character of gossluzhba and the perception of officials, citizens, emphasize the centralization of power. “Form is no substitute for spiritual meaning, but one has to start somewhere,” says Milon.

He explained RTVI that prepares a bill, it a “concept worked out”. The Deputy will make it after the New year for discussion of the faction “United Russia”. Milonov would like to start a public debate, for example, the survey in whatever form the citizens wanted to put MPs and Ministers. He complains that he has previously written a letter to Prime Minister Dmitry Medvedev on the form for representatives of Executive authorities, but received no response.

Many employees already wear uniforms. In addition to law enforcers, prosecutors and the court, it is the foreign Ministry, a separate unit of the Ministry of natural resources, as well as spin-offs from the state Russian Railways and “Aeroflot”, “Mail of Russia”.

The latter became the center of a scandal around the mold to guide the units. Form resembled the uniforms of the German SS during the Second world war. In the last week of memes on the subject of forms of “Mail of Russia” have flooded social networks and cables channels.