“Crying and singing”: what did you do in the second-class carriages

In Russia showed the interior of the new second-class carriages, which can be in operation in 2019. Models models at first glance look very attractive and have more personal space. Older cars are expected to gradually withdraw from circulation. 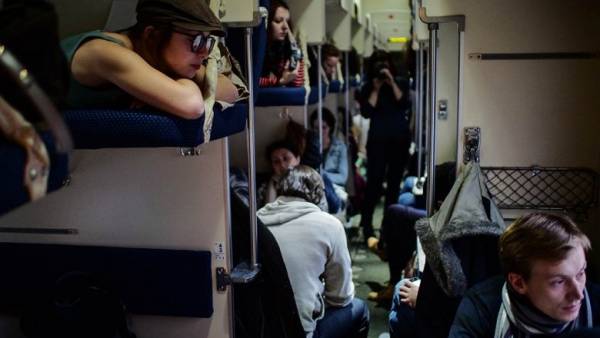 Russia is preparing a radical reform of the parlor cars. Models of the new model, which is planned to put into operation the following year, distinguished by a harmonious design and increased in comparison with the old patterns, personal space.

Wagons of this type are used on the railroad in the XIX century, always remaining a target for jokes and exercises in irony.

In pre-revolutionary Russia the most popular were the cars of the third class. Since 1879, to distinguish the more prestigious blue and yellow, they began to be painted in green. Mass Assembly of cars of domestic production started in the 80-ies of the XIX century — prior to that was operated mostly by foreign compounds.

The first cars of the third class created for the Alexander factory in St. Petersburg, had benches installed on the sides of the Central aisle and a total capacity of 90 people.

On the sides of the car was located in open areas, separated from the passenger area by a door. Toilets in trains was located only in baggage cars. To use them, it was necessary to move the foot pegs on the outside of the cars. The same way the train was moving conductors.

to Upholster the road: the interesting abandoned Transpolar highway

Tickets to the various category of cars were those times on social grounds. In the third grade, which the historians of the railway is recognized as the predecessor of the modern second-class carriages, traveled persons of modest means.

“More were filled with compartments for third class people and small business, not very far. In one of the cars of the third class, with the dawn, found themselves against each other, by the window, two passengers — both young, both almost light, both dapper dressed” — so described the usual trip to “the idiot” by Fyodor Dostoevsky.

However, Leo Tolstoy, though he could afford tickets for more prestigious categories went to the third grade.

Once the writer is very indignant when because of lack of space with his companions tried to post in the second grade.

The poet Alexander Blok in his poem 1910, “On the railroad” noted that it was in the third grade were more interesting events during the trip:

The cars were a familiar line,
Trembled and creaked;
Silent yellow and blue;
Green cried and sang.

In the book Eugene Mortisaga “the History of rolling stock of Railways of the USSR” described two-axle third-class carriage, the body of which was built in Kovrov in 1892. Shelves that served as day backs for the cross benches, on the night stand and closed, forming a bed for three passengers. A convertible seat one of the benches gave the opportunity to form a single bed for the three of the lower benches. In such cars, as we know from the memoirs of various politicians, after the February revolution, returned from exile Mensheviks and representatives of almost all the others are forbidden in the Imperial power of the parties.

After the October revolution, the former classification is abolished. The third class was called “hard second-class cars long distance”.

The name “second-class carriage” was found in “Memoirs of an ordinary” Michael Lesina, January 10, 1918, arrived in this way in Petrograd at the III all-Russian Congress of Soviets. In 1920-e years produced wooden 14-foot wagons, and in the 1930s their length increased to 20.2 m. Such a standard is called “egorovskaya” on the Leningrad car-building factory, 1922, bearing the name of a revolutionary and KGB officer Ivan Egorov. In the prewar period “egorovca” became the basic type of passenger cars.

“Ruble” on wheels. 10 interesting facts about the Orient Express

The next upgrade occurred in the mid-1930s, when the Kalinin plant was built the first Soviet all-metal wagon with the conditional name “Catch up and overtake”, but in industrial production technology has not gone.

Development came to a virtual standstill for about a decade. During the great Patriotic war factory capacity to solve problems in the accelerated production of war machines.