The non-public nuances. Do give Russia the Kuril Islands?

The Kremlin could not explain the statement Shinzo Abe not to place US military bases on the Islands of Habomai and Shikotan. 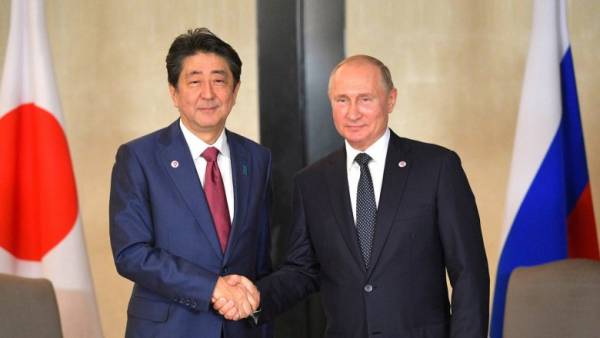 Prime Minister Shinzo Abe through the newspaper Asahi Shimbun said today that in the case of possible transfer of Japan of the southern Kuril Islands the US military bases there are not. A few hours later at a press conference, the Japanese leader said that Tokyo will seek to resolve the issue of nationality of all the southern Islands of the Kuril archipelago. In the Kremlin to explain the words of Abe couldn’t. Press Secretary of the President Dmitry Peskov said that at the recent talks, Putin and Abe discussed the peace Treaty between the countries, one by one, and the nuances he did not wish to make public.

“As for nuances, I would not want to make them public. I can confirm that the subject of Treaty obligations of Japan is important in the context of a discussion of a peace Treaty,” commented very painfully perceived by the Russians the statement Shinzo Abe, Dmitry Peskov.

He recalled that the two leaders at a recent meeting in Singapore on 14 November, agreed to accelerate the negotiation process on the basis of the Soviet-Japanese joint Declaration of 1956, suggesting the possibility of transferring to Tokyo several of the Kuril Islands on certain conditions. At the meeting, Abe expressed hope that Russia and Japan will resolve the territorial dispute and sign a peace Treaty. And Vladimir Putin, answering questions of journalists, has confirmed that negotiations about the Islands began on the basis of the 1956 Declaration.

“In 1956, Soviet Union and Japan signed a Declaration, called “Declaration of 1956″. What does it say? It says that the Soviet Union after the signing of the peace Treaty is ready to transfer two Islands, two southern Islands of Japan. Does not say on what basis the transfer, does not say under whose sovereignty these Islands will remain, it does not say on what basis this is done. Recorded but the willingness of the Soviet Union these two Islands to pass,” — said the President of Russia.