Rutskoi and the company. What happened to the participants in the August coup?

Former Vice-President of Russia spoke in an interview about the events of the August coup in 1991. 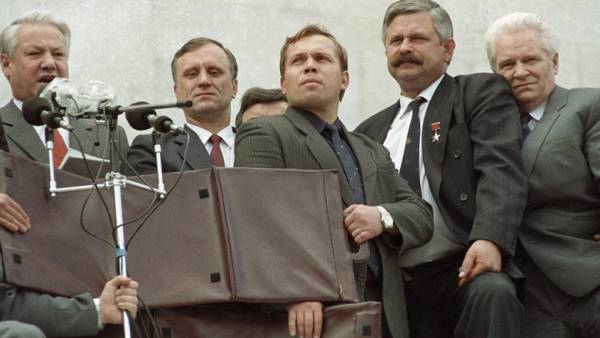 From 19 to 21 August 1991 in Moscow there was a political coup, which was the overthrow of the government. The main reason was the results of the reforms and dissatisfaction with the policy of perestroika, which was held by Chairman of the Central Committee of the CPSU Mikhail Gorbachev.

Khasbulatov told about regards to the meeting Yeltsin to escape to the U.S. Embassy during the coup

Gorbachev was forced to resign his office and disband the Communist party, the Cabinet of Ministers, national ministries and other state bodies, and Vice President Gennady Yanayev announced the creation of a new public authority — the emergency Committee, composed of the first Deputy Chairman of the Council of defense of the USSR Oleg Baklanov, the Chairman of the KGB Vladimir Kryuchkov, Prime Minister of the SSR Valentin Pavlov, interior Minister Boris Pugo, and the President of the Association of state enterprises and industrial, construction and transport Alexander Tizyakov, President of the Union of the RSFSR Vasily Starodubtsev and Soviet defense Minister Dmitry Yazov.

Against the emergency Committee, headed by Yanayev was made by the President of the RSFSR Boris Yeltsin. He issued a decree that all Executive bodies should strictly obey the President. As the former Vice-President of Russia Alexander Rutskoi in his interview to the newspaper “Moskovsky Komsomolets”, Yeltsin during the coup, went on a binge for three days and not once tried to escape to the U.S. Embassy.

The confrontation between the two structures ended August 20, with the victory of Yeltsin, and all the members of the GKCHP were arrested. According to Rutskoi, Yeltsin, together with his team were hiding in the shelter of the building of the Supreme Council of the RSFSR, and when all was quiet, and it was announced about the victory continued the celebration of “freedom.”Boris Yeltsin

In August 1991, Yeltsin was the President of the RSFSR. On 12 June he was elected President at the first national election. August 19, after the creation of the emergency Committee and the isolation of Mikhail Gorbachev in the Crimea, Yeltsin headed the headquarters for the counter-conspirators and established in the “White house” centre of resistance.

Putin explained his choice during the August coup

On the first day of the coup, he called the actions of GKCHP as a coup and issued a number of decrees on the recognition action of the emergency Committee. On August 23 he issued a decree suspending the activities of the RSFSR in September — the decree about dissolution of Congress of people’s deputies and the Supreme Soviet, November 6 — on the termination of activity of the CPSU.

Until 31 December 1999, Yeltsin took on the duties of the President of Russia. After his statement about his own resignation of the acting President was appointed the Chairman of the government Vladimir Putin.

April 23, 2007 Boris Yeltsin died in the Central clinical hospital as a result of cardiac arrest. Buried in the Novodevichy cemetery in Moscow.

In 1991, Yanayev was the nominal leader of the coup. He and his supporters managed to attract about five thousand troops and several hundred armored vehicles, as well as to occupy the channels of the radio and television of the USSR.

In 1994, he was released on Amnesty. Worked at the Russian international Academy of tourism, served as head of the Department of national history and international relations. Was also a consultant of the Committee of veterans of public service and Director of the Fund of assistance to children disabled from childhood. Wrote the book “the putsch against Gorbachev. The last battle for the USSR.” Janaev has never admitted that he committed a coup d’etat. “In order to understand the logic of my actions, and the logic of my comrades, we must know the situation in which the country found itself in August 1991. Then we talked about the almost total crisis in the country was an open struggle for power between proponents of a unified state and social and political order and its opponents,” he said.

Politician died in September 2010. The cause of his death was lung cancer. The doctors decided not to pursue a course of chemo because the disease was neglected. Yanaev was buried on Troekurov cemetery in Moscow.

In 1991, Cormorants occupied the post of first Deputy Chairman of the Council of defense, was Secretary of the CPSU Central Committee for defense issues and was one of the members of the State emergency Committee.

Until January 1993, he was in the SIZO “Matrosskaya Tishina”, after which he was released under recognizance not to leave. In February 1994, the Cormorants were amnestied.

Since 1994 was included in the governing bodies of the party “Russian people’s Union” Sergei Baburin, was an adviser Baburin, when he was Deputy speaker of the state Duma. Also worked as an Advisor to the President of joint-stock commercial Bank “World” and at the turn of 2000-2010-ies served as Chairman of the Board of Directors of JSC “Rosobschemash”.

At the present time — Chairman of the International Union of public associations of friendship and cooperation with the CIS countries, “Kyiv Rus”. Lives in Moscow. In 2012 he published a book of memoirs and diaries “the Space was my destiny. Notes from “Matrosskaya Tishina””.

In August 1991 Gorbachev was released from Kryuchkov Chairman of the KGB of the USSR. He was one of the “masterminds” and informal leaders of the coup. 22 Aug Kryuchkov was arrested and was imprisoned until January 1993, after which he was released, and in February 1994 it is amnestied.

4 Oct 1994, he was dismissed from the organs of state security to retire. Since the mid 1990-ies he was a member of the Board of Directors of joint-stock companies (JSC) Region, part of the holding Vladimir Yevtushenkov AFK “System”.