Vladimir Putin arrived in Graz at the wedding, the foreign Minister of Austria

Russian President Vladimir Putin in Austria takes part in celebrations on the occasion of the marriage of the foreign Minister of this country Karin Kneissl, told “RIA Novosti” press Secretary of the President Dmitry Peskov. 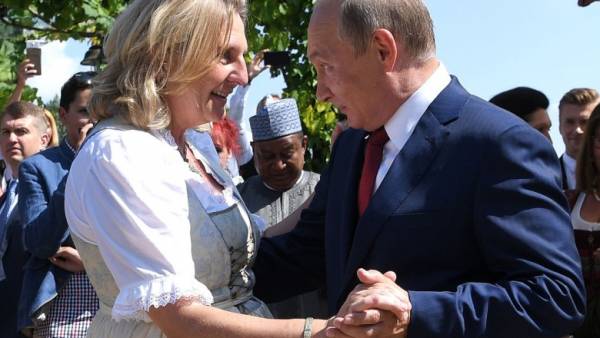 Mr Putin day arrived in the city of Graz, in the outskirts which will host the wedding. The Russian President made a brief stop here on a private visit on the way to Berlin where he will hold talks with German Chancellor Angela Merkel.

We will remind, for the first time in 2014, Vladimir Putin is heading to Germany for bilateral talks. Mrs Merkel will take it in the evening in the state residence Meseberg.

As the President of Russia met in Austria, read in the publication “Kommersant FM”.