The pastor will not refund: Erdogan is not afraid of US sanctions

Turkey has refused to extradite to the US, arrested us pastor. 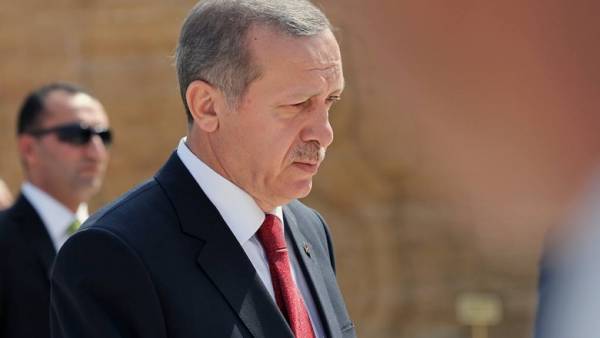 A Turkish court has refused to release American pastor Andrew Brunson from house arrest despite the fact that August 15 is the deadline of the ultimatum of the United States. If the U.S. citizen is not released, Washington promised new sanctions.

American media predict that Erdogan will lose the battle with US President Donald trump, however, the Turkish President, to save face, apparently, will resist to the last.

A Turkish court rejected a defense motion that seeks the release of American pastor Andrew Brunson and right for him to leave the country. However, the defense of the pastor now has the opportunity to appeal this decision to the Supreme court of the country, Reuters reports.

August 15 is the deadline of the ultimatum of the White house, which had previously said that if the pastor will not be released, Turkey would face new sanctions. Washington believes that Turkey arrested Brunson for revenge because it wants to make the United States the extradition of the preacher Fethullah Gullen his Turkey accuses of organizing the coup attempt in the summer of 2016.

A negative decision of the Turkish side says that Erdogan is not going to give up in the face of new sanctions.

Recep Tayyip Erdogan will resist any pressure, as far as possible, in order to save face.Theodore Karaikudi expert Gulf State

The expert predicts that “a confrontation regarding statements and threats will only intensify”.

Both parties are increasing the sanctions pressure on each other: Washington imposed duties on steel and aluminium, Ankara — additional duties on some American goods. The new Turkish restrictions already touched on such goods as cars and tobacco products.

In addition, Erdogan has ordered to freeze all existing accounts of the heads of the Ministry of justice and Ministry of interior of the United States. It is connected with introduced on 1 August the American party sanctions against the Turkish Ministers.

A hard position of Turkey in the American media attributed largely to the personality of Erdogan, who, like trump, is an authoritarian leader and is not inclined to compromise.

So, the Turkish President took several months for an apology to Russia for the Turkish military shot down a Russian su-24 in 2015. To apologize to Erdogan was forced serious problems with the sharp drop in tourism revenues from Russia.

In this part of the Turkish business, has been seriously affected by U.S. sanctions, calls on the parties to compromise. Turkish-American business Council admonishes Ankara and Washington to return to dialogue. “We believe that all the current problems can be solved through diplomacy, based on mutual respect for the rights and interests of each party and with the assistance of two presidents who will support,” — said in a letter published on the organization’s website on 14 August.

However, while the Turkish leader is not inclined to heed the advice, although, according to observers of The Washington Post, he’s playing “a losing game”. In the photograph, which illustrated the material the newspaper published the inscription “With friends like these”. It’s part of the famous proverb, which is entirely on Russian manners is: “With such friends and enemies do not”.

Trump and Erdogan while avoiding personal attacks on each other, however, the Turkish President makes it clear that unlike the US President has greater powers in decision-making.

According to the correspondent of radio station “the German wave” Seda SEDAR, the conflict between Ankara and Washington becomes “dangerous”. The journalist is convinced that Turkey and the United States as members of NATO should be allies. “But if Branson is not resolved, tensions with the United States will not decrease, the political climate in Turkey remains precarious. For this reason, Erdogan should send Branson home. The sooner Ankara make it, the better for everyone, especially for Turkey,” — writes columnist.

As previously noted in conversation with “Газетой.Ru” expert Yuri Mavashev, a turning point in the relations between Turkey and the United States would be the withdrawal of us military bases from Turkey.

The Incirlik base, which is located on the territory of Turkey since the cold war, is important to US — it is, in particular, carried out combat sorties in Syria. On the basis of serve 1.5 thousand soldiers and officers from among 2,2 thousand military and civilian persons of the United States in Turkey. It did here in the 1960’s stop the American pilot-scout Harry powers before the mission by shooting of military facilities in the USSR, where he was shot down.

If the United States withdraw from Turkey, the base can adopt a new NATO countries — such as Bulgaria and Romania, however, it is not. At the same time, the desire to create anxiety for the staff base Ankara has. In early August, a group of Turkish lawyers sent the lawsuits to the courts of the country, demanding the arrest of several American military, which they believe involved in the attempted military coup in Turkey in 2016.

According to Karasik, the “main question — what can happen in military relations between the US and Turkey in the military sphere and how they may be affected by the crisis.”

It should be noted that the Turkish authorities had attempted to close the American base in 1975, when the US imposed an arms embargo against Turkey in connection with the invasion of Cyprus.

Under pressure from the US, Erdogan demonstrates a growing interest in communication with European partners — for example, German Chancellor Angela Merkel, with whom relations had been strained. On Wednesday, Merkel and Erdogan held a telephone conversation, discussed how the situation in Syria and bilateral relations. In September, Erdogan should come to Germany, and this visit it will have special significance as an opportunity to show ourselves to Europe as a policy that could withstand the US pressure.