MURMANSK, 14 Jul — RIA Novosti. The transport Ministry has prepared measures in response to the possible termination of the Ukraine train and bus links with Russia, but hopes that their adoption will not come, said the head of Department Eugene Dietrich. 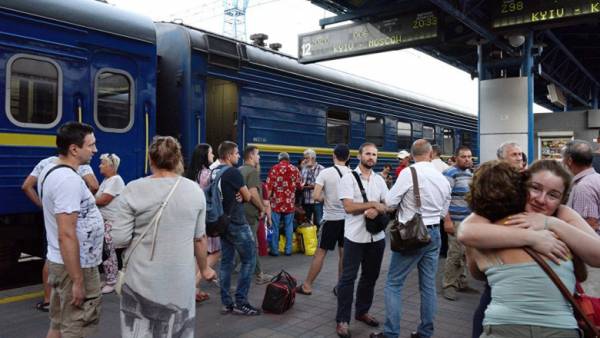 According to him, primarily after the introduction of such measures to the citizens of Russia and Ukraine will be unable to use the services of transport. The Minister believes that nothing but inconvenience and discomfort it will entail.

Unfortunately, I have to admit that the flow in this direction, we have fallen in recent time due to certain reasons which I would not call natural. However, the set of measures, which in this case could be taken, we worked. Eugene Detriment of transport of the Russian Federation

“If such decisions are made, we will find the opportunity to implement these measures. The composition of measures, I think that it is premature to discuss this issue,” he added.

Train service between the countries

Earlier, the Minister of infrastructure of Ukraine Volodymyr Omelian said that Kiev is considering the closure of the railway communication with Moscow. At the end of 2017, he also claimed that the losses of the Ukrainian side from this decision will be only one hryvnia.

While in the state administration of railway transport (Ukrzaliznytsya) reported that the most profitable Ukrainian train in 2017 was the composition of the Kiev — Moscow, he brought nearly six million dollars. However, passenger traffic long-distance trains in Ukraine were in General deeply unprofitable. The total loss amounted to 3.5 billion UAH (about 7,5 billion rubles).

From October 2015 between the two countries is completely absent air traffic, this step was initiated by Kiev. Passenger trains still run, but their number has decreased several times compared to what it was before the coup in Ukraine.

Between the countries there are no direct trains Russian formation. In Ukraine is only one transit train Moscow — Chisinau — Moscow. Other trains connecting Russia and Ukraine, belong to “Ukrainian Railways” and railway administrations of the CIS countries.