American researchers for example, 20 volunteers showed that eating roasted crickets useful for digestion, it is reported in Scientific Reports. In insects contains chitin and other fibers that contribute to the increase in the number of intestinal probiotics that improve digestion and reduce chronic inflammation. 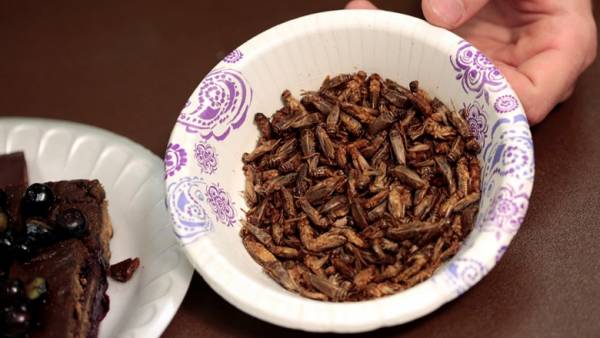 About two billion people worldwide regularly eat insects, which, if properly prepared, are a good source of animal protein, certain vitamins and minerals. The insects consume less food and water, and emit fewer greenhouse gases than traditional Pets, so the industry growing insects for food is gaining momentum.

In addition to the other nutrients, insects produce chitin and other fibers, which is their exoskeleton. Presumably, chitin has useful properties, contributing to the growth of microorganism-probiotics of the intestinal microbiome. However, the relationship between the presence of chitin in the diet and increasing levels of beneficial bacteria in the gut has not been studied.

American biologists and nutritionists under the leadership of Tiffany Weir (Weir Tiffany) of the University of Colorado and Jonathan Patza (Jonathan Patz) from the University of Wisconsin in Madison conducted a pilot study to determine whether chitin digestion. They found 20 volunteers aged 20-48 years of age who did not use probiotics, and within 14 days I gave the participants food for Breakfast (milk shakes and muffins) 25 grams of dried crickets in powder form.

The researchers then take a break for two weeks, and then 14 days again participants were fed powder from insects. In the beginning, after the first two weeks and at the end of the study, participants in the experiment took the analysis of blood and feces, and they also answered questions about the state of the digestive system.

It turned out that after the use of the powder from the crickets volunteers has changed the composition of the intestinal microbiome have about 5.7 times increased the number of the probiotic bacteria Bifidobacterium animalis. In addition, in blood plasma decreased the level of tumor necrosis factor — a protein marker of systemic inflammation. At the same time, a number of other probiotics in the microbiome fell. In particular, lactic acid bacteria Lactobacillus reuteri was three times less.

According to the authors, although the results of the study proved to be revealing, you need to conduct longer studies on larger sample in order to repeat the results and identify which substances contained in crickets, result in change of the intestinal microflora.

Recently, researchers calculated that the transition of Americans on a plant-based diet would help to feed an additional 350 million people — a little more of the US population. Manufacture of vegetable products does not require this amount of land resources, as the products of animal origin.