Therapist: every tattoo for Zombie Boy was a “dose”

Media reported about death tattoo model Zombie Boy, known for its variety of tattoos. Therapist Ramil Garifullin on radio Sputnik expressed psychological state Rick Genesta, and about how he was a person. 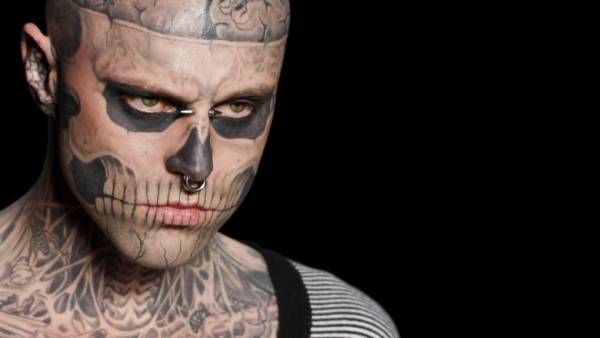 Reportedly, Genest was discovered dead Wednesday in Montreal. He was 32 years old. According to authorities, the man was experiencing psychological problems.

Rick Genest gained popularity in 2011 after starring in the Lady Gaga song “Born This Way”, after which he participated in many fashion shows. Learning about the incident, Lady Gaga wrote on Twitter that “more than devastated” by this news.

Rick Genest hit the Guinness Book of records as the person with the largest number of tattoos of insects and bones. The ink drawings were covered at least 90% of his body.

Genest made his first tattoo after surgery to remove a brain tumor, which he has experienced in 15 years. As reported by canadian radio station, his nickname arose in the time.

Associate Professor Institute of psychology and education, Kazan Federal University, PhD in psychology, psychotherapist Ramil Garifullin on radio Sputnik suggested that what was related to the decision Rick Genesta to cover almost all his body with tattoos.

“There’s not correct to say that tattoos lead to some psychological States. But on the contrary, there is already a certain psychological state — depression, emptiness, some loss of meanings, values. In one word — suffering. In this case, people are looking for different mechanisms in order to somehow “attached” to life, to organize a playful,” said Ramil Garifullin.

The tattoo is not just about drawing, it is primarily the process of its application, which is the overcoming of the test. And after this person for a while gets a certain elation and depression, of emptiness that he had, sort of disappear.Ramil Carefullychoreographed

He believes that the main problem Rick Genesta was that he suffered from addiction, that is felt an attachment to certain values, without which it could not live.

“I must admit that this personality, likely to have been additive, that is easily attached to different values, without which she would be depressed. Such values may be not only drugs, alcohol, such values can be, in particular, and tattoos. Therefore, the addiction, like addiction, is often the basis for what the man himself izrisoval, and not because he just wants to put the record, because of his limited body, and attacks the necessity of receiving a dose of experiences in the process of narisovanye happen more and more often, so of course he (Rick Genest — ed.) was all painted. So, the tattoos, their application is often a product of this addiction,” said the therapist.

In his opinion, the subject of tattoos in this case is secondary.

“They (people like Rick Genest — ed.) organized a border situation between life and death, a kind of extreme. And on this basis overcome, they feel certain values, release adrenaline and bind to life for a while.

So, again, this man suffered from depressive syndrome. With the help of his addictions, addictions caused himself a surge of adrenaline, like a drug addict. The origins of his depression.

The content of his tattoos associated with the subject’s death is all secondary. Primary — this process, when he himself engages in self-torture, a kind of overcoming. Thus, the dosage of these processes grew, and, therefore, grew and depression. It’s also possible, thus it was replaced by drug use, replacing them with the extreme,” concluded Ramil Garifullin.