Smile opens all doors: the rules of life of the President of Croatia

Kolinda Grabar-Kitarovic has deprived himself of the presidential salary for the days that she was absent from the workplace because of the world Cup. Her life goals — in her quote.

In an interview with Croatian newspaper Dnevnik.hr Kolinda Grabar-Kitarovic said that even if the Croats don’t win in the finals of the world Cup, the world will still consider them winners.

One winner from Croatia in the finals was definitely and she is the one.

According to the calculations of Croatian analytical center Mediatoolkit, media materials, dedicated final game at the world Cup, Grabar-Kitarovic mentioned 25% more often than any of the players coming on the field.

Madam President has fascinated football fans for its simplicity: first, she refused to fly first class to Russia to support their national team in the game with Denmark, and chose the economy option, then announced a boycott of the VIP stands.

She have deprived themselves of the presidential salary for the days that she was absent from the workplace due to the world Cup, and has repeatedly violated the official dress code for all games for the Croatian national team appeared in a t-shirt with national symbols. The most vivid statements of the President from the people at Forbes Woman. 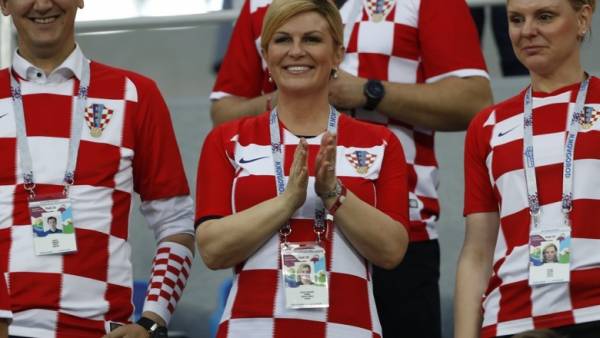 In preparing the articles used material: Dnevnik.hr Girltalkhq, AFP, The Washington post, Euronews, Index.hr is The Guardian and Euronews.