CAIRO, 19 Jul — RIA Novosti. Egyptian scientists discovered in the black of the Alexandrian sarcophagus, three mummies damaged, said on Thursday the news portal “Youm7” with reference to the head of the Department of antiquities Mustafa al-Vaziri. 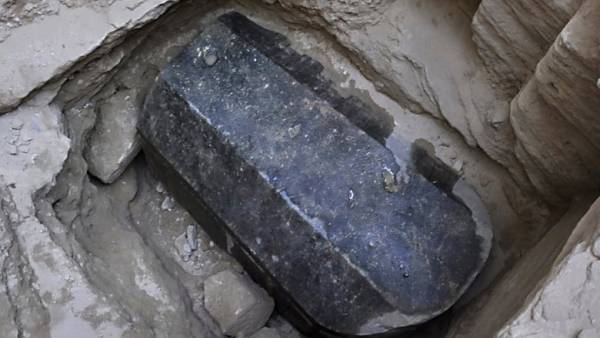 According to him, the mummy was found did not belong to any Royal family. “No connection with the Royal families of Ptolemaic or Roman period, these mummies are not, as on the sarcophagus are missing proper titles,” said al-Vaziri.

He also noted that the mummy was badly damaged by water that leaked into the coffin through a crack. Scientists now we have to figure out who exactly was buried here.

Untouched by looters sealed the mysterious gigantic sarcophagus of black granite, weighing 25-30 tons was discovered in early July, when carrying out construction works under one of the buildings in Alexandria. In the same place at a depth of five metres was found a 40-centimeter fragment of the statue of the man of marble and some other artifacts.

It was reported that on-site excavations may be monuments of the Hellenistic period of Egyptian history (about 332-330 years BC). In the same area are already open burials relating to the IV century BC.

The mystery of the sealed sarcophagus has generated a lot of rumors in the Egyptian and European media. In Egypt talking about the “curse of Pharaoh” and that the sarcophagus, not likely was still open and looted because of a certain “evil”, the prisoner in it. Fears fueled by the unusual black color of the monument and its giant size (265 centimeters in length, and 185 in height and 165 — wide). The Western press made the assumption that the sarcophagus could belong to Alexander the great, burial place which still not been found.