Moscow. July 12. INTERFAX.RU — U.S. President Donald trump on Thursday tweeted a letter about the successes in strengthening the relations of Pyongyang with Washington, which wrote to him, North Korean leader Kim Jong-UN. 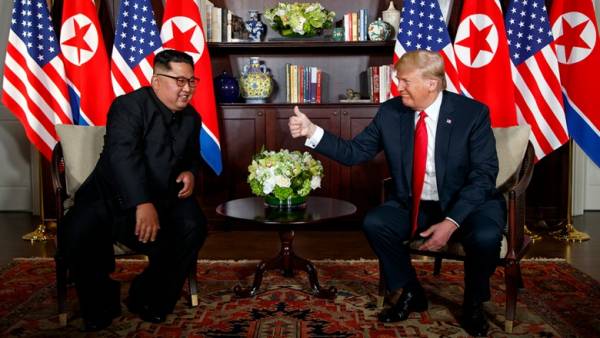 In the letter Kim Jong UN said that he hoped for further action in the framework of the dialogue between the United States and North Korea. “I wish to further practical initiatives boosted confidence in you, Mr. President,” the letter reads.

Also, Kim Jong UN expressed conviction that the “epoch-making progress in relations with the DPRK, the United States will serve to bring our future meetings.”

“A very pleasant letter from the President, Kim Jong-UN from North Korea. Done a lot of progress!”, in turn, trump wrote.

In a letter dated July 6, Kim Jong-UN notes that the joint statement he signed with trump in Singapore “marked the beginning of a meaningful journey”.

“I deeply appreciate the significant and outstanding efforts that made by the President to improve relations between the two countries, and to faithfully implement the joint statement,” — said in the letter.

Kim Jong-UN expressed the hope that its joint venture with the trump effort, “aimed at creating a new future for the DPRK and the United States, they will achieve the goal.”

Last week, U.S. Secretary of state Mike Pompeo paid a two-day visit to the DPRK. The beginning of his visit had on July 6 — the day that the letter dated Kim Jong-UN Trump.

Following the visit, he said that the talks in Pyongyang were productive, the parties were configured friendly. Pompeo noted that he had held “detailed and substantive discussion on the steps that should be taken”.

However, after Pompeo visit of the DPRK foreign Ministry issued a statement which said that “the United States made unilateral and bandit demands for denuclearization”.

Pompeo said in response that he does not consider the requirements of the gang, noting that the same actions from the DPRK for the denuclearization of waiting for the UN security Council.