There are no forests without fire

In the area of natural fires this year is catching the worst. 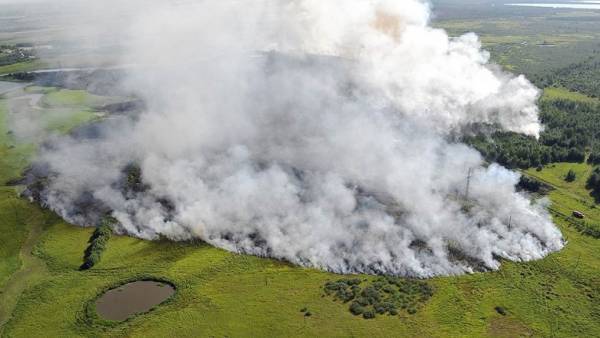 2018 was a record for the area of forest fires in Russia over the past few years — since the beginning of the year across the country covered the fire for more than 10 million hectares, say the environmentalists. According to them, this year catching up on these indicators 2003, 2008 and 2012. Officials also called the situation outrageous and draw attention to the low efficiency of detection and suppression of fires in the forests. However, the FFA does not consider the situation catastrophic, and reported an increase in Federal funding of several regions on the territory of which most of the natural fires.

According to environmentalists, this year was the fourth “a firefighter catastrophically” over the last 15 years.

“Across the country we had three record years: 2003, 2008 and 2012”, — said the head of the forest Department, “Greenpeace Russia” Alexey Jaroshenko. According to the state information system of remote monitoring of forest fires (remote monitoring-FFA) in the same period of 2003 (first half) total area damaged by fire, was almost 13 million hectares, and in 2008 — about 12 million ha. “we can All remember 2010 when the fire was close to the most densely populated items, — notes Mr. Yaroshenko.— But across the country it has not been catastrophic, because Siberia and the far East, which give always the main area for forest fires, burning the weak.” Experts say that this year is catching up with the last record space 2012 then July 8, the fire had traveled more than 11 million hectares. “unfortunately, the fact that in Siberia burning a few million hectares of forest at the same time, is a sad norm, — said the head of the forest program at WWF-Nikolai Shmatkov.— We already had last year such cases, but this year claims record”.

About the difficult situation with forest fires previously stated Deputy Prime Minister Alexander Khloponin (first oversaw the sphere of nature): “This year we have outrageous. We can assume that we do not respond well to the situation on the ground and the regions themselves are spreading these fires.” The head of the Federal forestry Agency Ivan Valentine also noted that in 2018 natural fire “worse find worse extinguish”. The FFA has said several times that the issue of federalization of authority on the protection of forests from fires (after the adoption of the new edition of the Forest code in 2007, responsibility for this activity rests with the entities). Now in FFA, “Kommersant” reported that this year has been increased Federal funding for Siberian and far Eastern Federal districts on suppression and prevention of forest fires in most affected regions, in particular in Yakutia, Irkutsk and Amur regions. In the Federal Agency recognize that the fire season in 2018 started “well ahead of the average annual indicators”, however, the situation with forest fires are not catastrophic.

The suppression of forest fires requires a systematic approach and simultaneously increasing funding will not solve the problem, said the head of the international fire project Greenpeace Anton Bereslavsky. “The situation with forest fire protection in Russia gets worse with every year, — the expert adds.— Plus, the climate becomes drier and warmer, creating favorable conditions for fires.”