The congressmen invited the Russian deputies to the USA

MOSCOW, 3 Jul — RIA Novosti. The state Duma has accepted the invitation of American congressmen to visit the U.S., the trip of the official delegation may take place before the end of 2018, told reporters the head of the Committee on Finance Anatoly Aksakov. 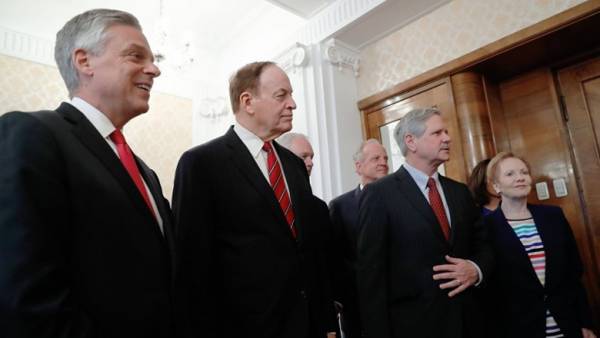 When asked if representatives of the state Duma invitation, Aksakov answered in the affirmative.

He also noted that such a visit could take place before the end of 2018. “Yeah, maybe,” said Aksakov, responding to a question.

A group of us congressmen arrived in Russia on June 30 and has held a number of official meetings in St. Petersburg. On Tuesday, the U.S. delegation was received by Minister of foreign Affairs of the Russian Federation Sergey Lavrov.

In the state Duma with us congressmen also meet the first Vice-speaker of the state Duma Alexander Zhukov, who oversees the inter-parliamentary relations of Russia and the United States, the special representative of the state Duma international inter-parliamentary and public organizations for development of sports Vyacheslav Fetisov, the coordinator of the group for relations with the United States Congress Inga Yumasheva, head of the international Affairs Committee, Leonid Slutsky, Chairman of the Committee on financial markets Anatoly Aksakov, Chairman of the Committee for agrarian issues, Vladimir Kashin, the head of the Committee on science and education Vyacheslav Nikonov.