VTSIOM: the rating of the Russian government fell in June because of rising gasoline prices

The survey results also influenced the proposal to change the pension legislation, said the head of the practice of political analysis and consulting of the center Mikhail Mamonov. 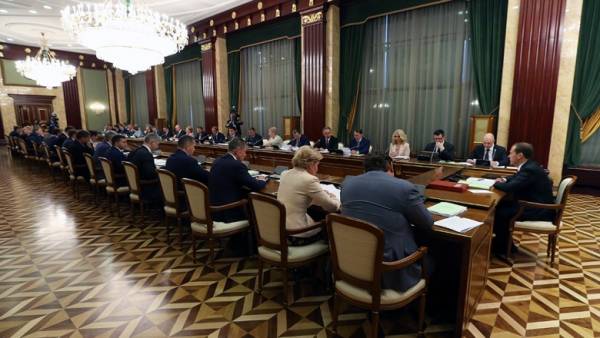 MOSCOW, June 22. /TASS/. All-Russia centre of studying of public opinion (VTSIOM) recorded a decrease in the rating of the government of the Russian Federation in June, experts attribute this primarily by growth in petrol prices in the country.

According to a survey conducted by VTSIOM 11-17 June and published on Friday on the official website of the organization, approved the government’s activity in this time of 44.7% of respondents who were asked the question, approve or disapprove they are generally activities of a state Institute. Meanwhile, a study from 4 to 10 June, recorded this figure at the level of 47.1%, a week earlier, 49.7 per cent. At the same time increased the number of those who declared their disapproval of the activities of the Cabinet: from 32.7% (interview 28 may — 3 June) to 38.5% (current performance).

VTSIOM also notes a decrease in assessments of the Prime Minister and the President of the Russian Federation. If according to the survey beginning of June, the activities of the Prime Minister approved of 41.7% of all respondents, among respondents to the questions sociologists 11-17 June, the figure was 38.5 percent. Indicators approval of the head of the state in these periods, respectively 77,1% and 72.1%.

“Strengthening of negative indicators in relation to government institutions, especially the government of the country, there were polls at the end of may — early June. The reason is the rising price of gasoline and the lack of prompt and adequate, according to the Russians, the government’s response to this situation”, — commented the information of this survey practice leader for political analysis and consulting VTSIOM Mikhail Mamonov.

The second factor “gain criticality of the population” was, in his opinion, the proposal to change pension legislation. “It is with apprehension perceived by society, and this is quite natural, in terms of the fragmentation pattern changes, the vagueness of implementation mechanisms there is still a negative attitude,” said the sociologist, adding that it “affects the attitude to the authorities”. No exception in this context was the President of the country, “especially because after the election, requests for President traditionally stronger,” said Mamonov.

Further development of the situation, he said, depends mainly on the effectiveness of government measures to control prices for gasoline and a competent information policy on clarifying your vision of retirement changes.

The population’s understanding of the situation will calm public opinion and reverse the adjustment of estimates.Michael Manoevrability practice of political analysis and consulting Timetodie research