Trump commented on his photo with leaders of the G7 countries

MOSCOW, June 16 — RIA Novosti. The President of the United States Donald trump commented in his Twitter a photo from the summit “the Big seven” in Canada, became famous for the faces of the leaders of the participating countries. 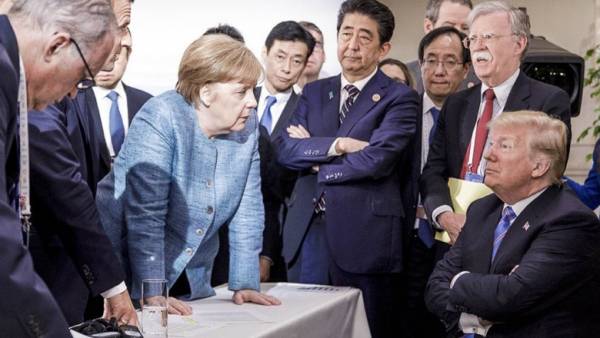 In the photo, which became viral in social networks, German Chancellor Angela Merkel strictly looks at the tramp, who sits at the table, arms crossed. Near Merkel met European leaders, next to the American leader, his Advisor John Bolton. Between them stands Prime Minister of Japan Shinzo Abe. When it took the picture politicians sitting President of the United States.

“I have a great relationship with Angela Merkel, but false media show only bad pictures of the negotiation process (implying anger), where I demand things that are not asked of any other President of the United States!” — wrote the American leader.

I have a great relationship with Angela Merkel of Germany, but the Fake News Media only shows the bad photos (implying anger) of negotiating an agreement where I am asking for things that no other American President would ask for! pic.twitter.com/Ib97nN5HZt

This entry trump was accompanied by other images of this moment, Merkel and the Prime Minister of Canada Justin Trude on the faces of smiles.

Later, the head of the White house has published a few photos from the summit “the Big seven” on which he shakes hands with the President of France Emmanuel Makron and the Prime Minister of great Britain Teresa may.

The G7 summit took place on 8-9 June in Quebec. According to its results, the parties agreed on a communiqué, initially, Trudeau stated that it is agreed by all countries, later the document was published. However, trump, going to Singapore for a meeting with North Korean leader Kim Jong-UN, said the United States did not support this document.