National Interest: “Terminator 3” will win the most deadly weapons in the U.S.

MOSCOW, 15 Nov — RIA Novosti. Developed in Russia fighting machine infantry support (BMPT) “Terminator 3” can shoot down drones, which are “the most lethal weapons of the United States,” reads the material National Interest. 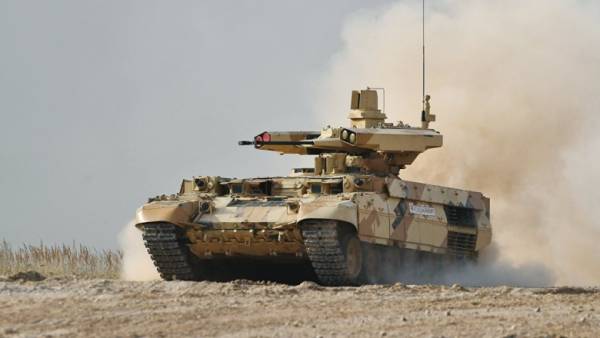 The third generation BMPT-72 “Terminator”, the author writes, can hit all types of targets: air, ground, and animate and inanimate power of the enemy. While in new versions appear ammunition “air — ground” with a variable trajectory and the possibility of detonation during the flight, which will allow “Terminator 3” to shoot down unmanned aerial vehicles, the article said.

However, the author believes, the transformation of the BMPT-72 in platform combat drones raises a number of questions. The expert notes that “Terminator 3” will be equipped with guns, grenade launchers, machine guns, anti-tank missiles and anti-ship weapons.

“Where to place the weapons to fight with drones, if on this machine and so, with nine different weapons systems? Where to install a radar station? If the radar is not, then the Terminator will be able to fight only with small drones on sight”, — says the expert.