The historic summit, the US and the DPRK will be held in Singapore

SINGAPORE, June 12. /TASS/ — As noted by the Prime Minister of Singapore Lee Hsien Loong, on the preparation and conduct of the meeting was spent about $15 million. 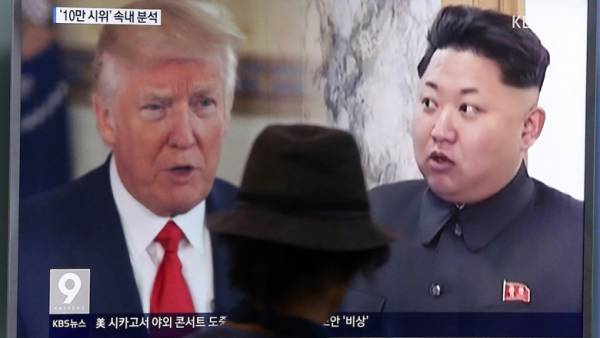 The historic summit between U.S. President Donald trump and North Korean leader Kim Jong-UN will be held on Tuesday in Singapore. For the first time the two leaders sit down at the negotiating table, which ultimately can be an important step toward reconciliation on the Korean Peninsula and its denuclearization. But they can fail in a few minutes after the start. Trump has said on several occasions that he is already on the first minute of the negotiations it will become clear if they’ll lead to the desired result and that he will interrupt the meeting if they decide that Kim Jong-UN is not configured to negotiate seriously.

As it will be

Officially confirmed information about how will be held this day, a little bit. The white house announced that the start of negotiations is scheduled for 09:00 local time (04:00 GMT).

Also, the us administration confirmed previously appeared in some media that the direct talks between the two leaders will be preceded by meeting with them face to face — in the presence only of translators.

Reuters earlier reported that Kim Jong UN intends to leave Singapore at 14:00 local time (09:00 GMT) — after just five hours after the alleged beginning of the summit. However, the foreign Minister of Singapore Vivian Balakrishnan in an interview with the British broadcasting Corporation bi-Bi-si did not exclude the possibility that the meeting of the leaders of the two States may be extended for one more day.

Earlier, the President trump also stated that he did not intend to sign any documents after the meeting. But, considering the unpredictable nature of the White house, which fully manifested itself during the recent G7 summit in Canada, to make any accurate predictions on this score, nobody can.

At the same time, the day before the summit, President trump on Twitter expressed confidence that the summit with Kim Jong-UN goes well.

“Tomorrow we will have a very interesting meeting, and I’m sure it will go well,” said the US President.

On Monday, the state Department also carried out active consultations with representatives of the Ministry of foreign Affairs of the DPRK, trying, apparently, until the summit watch possible to bring the sides closer together on key issues.

During the day, U.S. Secretary of state Michael Pompeo was repeatedly told about these consultations. In particular, he described the talks on the eve of the summit informative, but stressed that Washington still maintains the commitment to complete, verifiable and irreversible denuclearization of the Korean Peninsula. In these negotiations with the DPRK participated, in particular, Deputy Minister of foreign Affairs Choi sung Hee. In the last month she has acted with sharp statements in the address of Washington and even threatened a review of the decision to hold the summit.

Speaking at a press briefing on Monday, Pompeo also said that the U.S. is ready to provide the DPRK with security guarantees if it renounces nuclear weapons. At the same time he promised that pressure on North Korea will be continued and even strengthened in the case if the diplomatic approach doesn’t work.