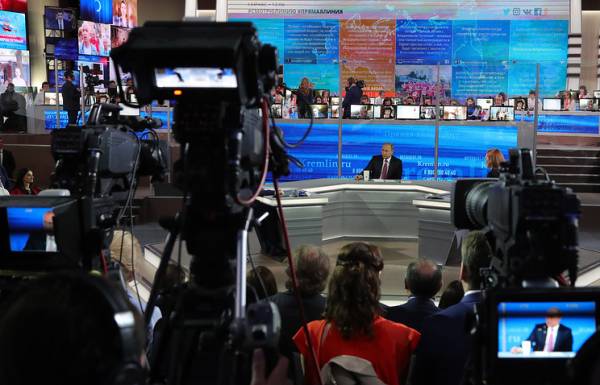 7 Jun live will the program “Direct line with Vladimir Putin”, during which the President will answer questions of citizens of Russia and other countries. For the President it will be the first “Straight line” in a new six-year term at the highest state post, and the 16th since 2001. This year direct line will be held using conference calls with governors and government members to respond to complaints and appeals of citizens.

First direct form of communication with the Russian President on national television and radio channels was organized on 24 December 2001. In the future, straight lines were held annually, except in 2004 and 2012. All Putin has participated in 15 assists, including 11 times as President and four as Prime Minister.

During these transmissions Putin answered 1047 questions. In the air there have been over 100 live broadcasts from the regions of Russia and States of the former Soviet republics. If you add up all the time, which Putin answered the questions, it will be 56 hours 32 minutes.