The Director of “RIA Novosti Ukraine” Kirill Vyshinsky, who was arrested in Ukraine on charges of treason, asked for help from Russian President Vladimir Putin. 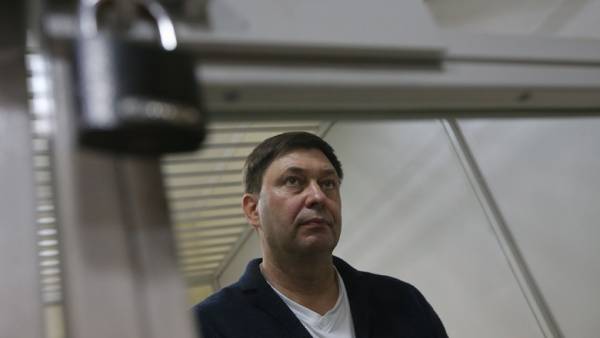 He stated this during the consideration in court of the Kherson appeal for his arrest.

Appeal to the President Vladimir Vladimirovich Putin with a request to take all necessary measures for my speedy release and to provide me legal protection from the Consulate and Embassy.Cyril Lisinskicroatian “RIA Novosti Ukraine”

Mr. Vyshinsky said that now considers himself exclusively a citizen of Russia. He added that he has appealed to the President of Ukraine Petro Poroshenko with the application for renunciation of Ukrainian citizenship. Mr. Vyshinsky said that his refusal of the Ukrainian passports will reduce the pressure on his family. He also said that this case is a way to put pressure on him, and the process called “torture”.

“I want to thank the international community for attention to my modest person and attention to the situation of persecution of journalists in Ukraine. I’m sure it is to some extent reduced the pressure not only on me but also on my colleagues,” — said the journalist in court (quoted by “RIA Novosti”).

We will remind, Cyril Vyshinsky was detained after the searches in the office of “RIA Novosti Ukraine” on may 15. Later the journalist was accused of treason and arrested for two months. According to investigators, Mr. Vyshinsky in the materials agitated for separatism in the Eastern regions of the country. The Russian foreign Ministry has described the situation with the journalist of “flagrant outrage”.