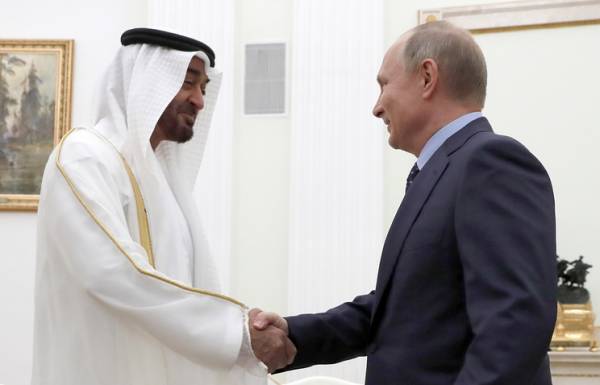 MOSCOW, June 1. /TASS/. The President of Russia Vladimir Putin and crown Prince of Abu Dhabi Mohammed bin Zayed al Nahyan signed the Declaration on strategic partnership of Russia and the United Arab Emirates. The document was signed following the talks, Putin and al Nahyan, held in the Kremlin.

Earlier, the Russian leader, opening the meeting with al Nahyan, stressed a significant role of this document. “It will be another good step in strengthening our bilateral relations,” he stressed.

The creation of a coalition to combat terrorism

Russia and the United Arab Emirates calls for the establishment of a broad international coalition to combat terrorism based on respect for the sovereignty of States. The statement is contained in the Declaration on strategic partnership of Russia and the UAE.

“The parties believe that the unprecedented spread of international terrorism and extremism, structures and organizations that threaten the security and sovereignty of States, requires the world community to take decisive collective action, without double standards and selectivity, in accordance with international law and the UN Charter. Parties call for forming a broad international coalition to combat terrorism and extremism, which would be based on respect for the sovereignty of States directly affected by the terrorist attacks,” – the document says.