Russian foreign Minister Sergei Lavrov met in Pyongyang with North Korean leader Kim Jong-UN. Initially the meeting was reported by unnamed sources “Interfax”, RIA Novosti and TASS in the Russian delegation. The press service of the Russian Ministry of foreign Affairs in his Telegram channel published photographs of politicians. 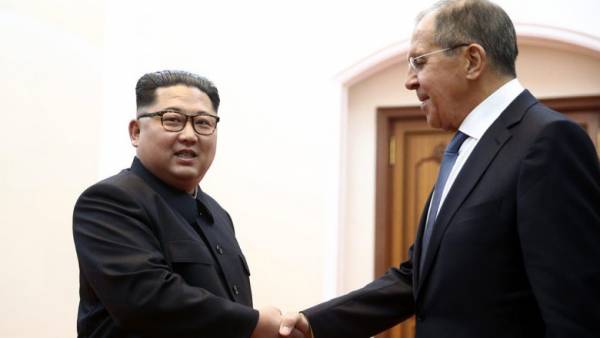 Earlier, the Minister of foreign Affairs of Russia held in the North Korean capital, the talks with the foreign Minister of the DPRK ri Yong Ho. After talks with him, Lavrov said that Moscow is ready to support the agreement on the DPRK to meet the interests of all parties involved and passed on to the Agency.

“But when these agreements will be subject to some consideration by the international community may have for the Security Council to support these or other initiatives, of course, we’ll be ready to speak for the concrete agreements that will benefit all involved parties, including the DPRK,” — said the Russian diplomat.

Visit of Minister of foreign Affairs of Russia in Pyongyang took place two weeks before the scheduled June 12 meeting of leaders of the DPRK and the U.S. in Singapore, as well as on the background of the dialogue between North Korea and the DPRK. Over the past month in the border town of Panmunjom have been two meetings of the leader of the DPRK and the President of the Republic of Korea moon Jae-In.