Why not built a cargo submarine to the Arctic

Soviet engineers developed projects of submarines for the transport of liquid and bulk cargoes under the ice of the Northern sea route in 1940-60-ies. 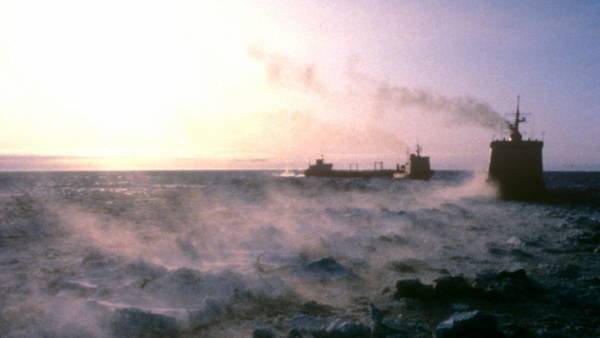 Soviet scientists in the 1950s and 60s years planned to build a cargo submarine to the Northern sea route. The documents attesting to this, historians have found in the Central state archive of scientific-technical documentation, St. Petersburg (SPb TSGANTD). What was supposed to be a submarine and why the project was terminated, told the researcher of Arctic Museum and exhibition center Mikhail Savinov.

“A cargo submarine was intended for the carriage of liquid bulk cargoes under the ice along the Northern sea route. In the archive we found the sketch and correspondence, revealing the purpose of the project and the reasons why it was not implemented. The dates and content of the documents it is clear that the unrealized project was designed in 1958-1962 years, the correspondence continued until 1964,” he said.

Mikhail Savinov and his colleagues Pavel Filin and Maria Emelina included this story in the publication “Arctic beyond science fiction,” which brings together the most daring Arctic projects not implemented for various reasons. This energy from the cold, and the change in the bed of the Ob river in its lower reaches, and flying wind power station. Then, projects were developed for the management of climate, the construction of a dam in the Bering Strait, the channel of the Yamal icebreaker USS, gidrolizata.

It was about creating a completely new underwater vessel that could carry both dry and liquid bulk cargo, and not on re-equipment of some existing object. The developers set themselves the task of removing seasonality in Arctic navigation.Michael Savinovsky fellow Arctic Museum and exhibition center

The ship intended for the carriage of cargoes under the ice, was to develop “ice speed greater than 20 knots”, have a cruising range under-ice position for at least 3000-4000 miles. In the discussion of the project actively participated scientists of the Arctic Institute (AANII), other scientific institutions and “nsra” — an inter-Ministerial structure in charge of the work in the Arctic from 1932 to 1964.

“The greatest interest is underwater ice swimming, where this type of transport may be the most promising in solving the problem of regular transportation of national economic cargo in the Arctic basin”, — said the interlocutor of the letter of the acting Director of AANII A. P. Gordienko, Director of TSNII-45 V. I. Pershina. Among the advantages of the new type of vessel the author of the letter called “the independence of the voyage of the submarine from the sea state and weather, the absence of wave resistance at a sufficient depth”.

Having studied the correspondence, the researchers found “support to the development of technical specifications for the design of transport underwater ship ice to the Arctic” dated 17 December 1959. “Document was given great attention to the “development of nuclear submarines in the USSR and abroad. Perhaps the designers assumed that underwater ice transport ship could be nuclear,” — said Mikhail Savinov.

Historians found mentions of the sponsors. “Developers were engineers V. M. Ivanov and A. A. Sorokin-Marin,” — said the researcher.

However, if they made a significant contribution to the shipbuilding, still could not figure out how to decipher the initials of the developers.

These names are unknown and Valery Bobrus, Deputy Director on scientific work of the Museum of history of Russian submarine forces them. A. I. Marinesko. He expressed the opinion that these engineers need to search among the staff who were involved in the development of military submarines, since no other similar competencies possessed.

The question of the establishment of the project cargo submarines was discussed before. On pre-war plans to build a cargo submarine was known to findings in TSGANTD.

In may 1941, the famous polar scientist Vladimir Vize substantiated the possibility of carrying submarines of goods through the NSR. The draft was reviewed by academician Yu. a. Shimansky was appointed to lead the development of the project cargo submarine to the Arctic. The work was interrupted by the war.Mikhail Savinov

Then the idea of a cargo submarine to the Arctic back in 1943. “The ship’s engineer P. I. Serdyuk made a project “underwater transport — tanker” with a displacement of 6000 tons”, — said Mikhail Savinov. Submarine Serdyuk, according to the interlocutor, had two solid body inside of a lung. Solid body located one above the other. The upper, larger, was used for cargo, and the bottom housed the machinery and crew.

The project was not approved, but in 1953, the P. I. Serdyuk appealed to the Ministry of sea and river fleet with a proposal to build ice vehicles. “The note was forwarded to DENMARK, where, without any reaction, “settled” in the materials Lab of the ice qualities of ships”, — says the researcher.

Valery Bobrus noted that in the period from 1943 to 1972, the Soviet Union had developed nine projects submarines, capable of large-scale transportation of military equipment, military goods and dual-use goods. Among them was a project 626 (ice submarine), which was developed in the 1950’s. However, is it the same project or not remains to be seen. “We are ready to cooperate with colleagues from the Arctic Museum and exhibition center. To establish the truth would be interesting and important,” says Bobrus.

Why not build a

Researchers believe that a cargo submarine has not appeared in the Arctic for economic reasons. “The meeting in the “nsra” 11 August 1960, stated that “currently, the carriage of goods on ships underwater and under-ice diving less profitable than icebreaking transport ships for ringrose (piece goods and the goods in the package — approx. TASS), and cost-effective for the transportation of bulk cargo to underwater ice tankers with the capacity of 30 thousand tons”, — quotes the document Mikhail Savinov.

The project correspondence lasted until 1964, it did not progress beyond technical specifications.Mikhail Savinov

Version Valery Babirusa close to the findings of researchers Arctic Museum and exhibition center. All nine projects were brought to the level of preliminary design, some projects managed to produce technical drawings, project 664 even began construction. “However, further work was stopped due to a significant number of complex financial and technical problems connected with the simultaneous creation of military nuclear submarines and transport submarines dual purpose. In the end the priority was given to fighting underwater shipbuilding,” — said the expert.

The experience of Germany, Japan, USA

In other countries — on the contrary, cargo submarines were built very actively. Valery Bobros said that “from 1914 to 1944, in the Kaiser and Nazi Germany had developed six draft transport submarines, which were brought to series of construction and was actively used in combat actions in all naval theatres”.

The main purpose of these submarines was providing ammunition, fuel, fuel, provisions and fresh water combat submersibles, submarine leading the war with great Britain and the United States. Cargo submarines worked on communications involving transport convoys of fleets of these countries.

Overload delivered was carried out in the sea, in adverse weather (storm) conditions, often under the noses of the enemy, a record for that time period time.Valery Bobrus

There were casualties among the German cargo submarines. “In total, according to incomplete data, during the years of the Second world war, Germany lost in the vastness of the southern and Northern Atlantic, at least 15 transport submarines,” — said Bobrus.

Japan from 1942 to 1945 has developed and launched serial production of the five draft cargo submarines, and they also took an active part in the hostilities.

In addition to the transportation of strategic raw materials, military, ammunition, fuel, food and medical supplies of the Japanese transport the boat yet decided purely their own, highly individual (national) the objective is delivery in the areas of combat operations man-torpedoes (kamikaze).Valery Bobrus

The large transport submarine was built it Japan. “It was a boat the I-400, capable of carrying simultaneously up to 1200 tons of cargo”, — he said. The total number of transport submarines built by Japan during the war, was 43, nine of them died.

In the United States in the period from 1942 to 1970, we developed six projects: transport, including one underwater tanker, transport and landing — it was mine layers, and amphibious transport submarines, including nuclear ones. “They were brought to the level of serial production. Some of them until 1993, has passed the modernization and still remain in the ranks. It’s nuclear submarines SSN-678, SSN 684 SSN-686”, — said Valery Bobrus.

During the Second world war the US Navy operated only four transport submarines, one of which was sunk by Japanese destroyers near Rabaul. “For lack of transport submarines at this time, the United States Navy have been widely used for the transportation of combat submarines, the expert said. American transport submarines of the cold war period differed in that they were all created based on redesign multipurpose nuclear submarines withdrawn from the Navy after the end of the term of service for direct appointment”.