Former President and Prime Minister of Armenia Serzh Sargsyan stated that he leaves the post of head of the ruling Republican party, TASS reported the morning of April 26. The new party Chairman is not chosen. 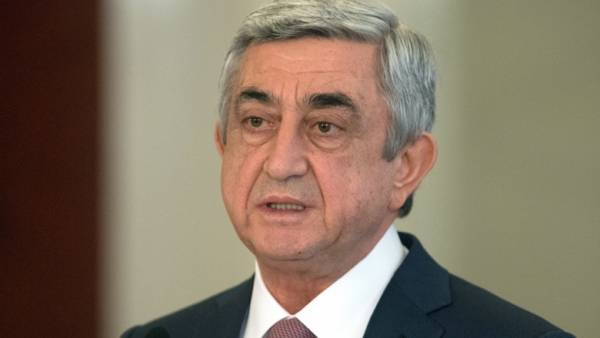 Prior to that, former Prime Minister and President of Armenia Serzh Sargsyan on April 23, resigned after 11 days of protests in the country. The demonstrators were opposed to Sargsyan occupied the post of Prime Minister who has more powers than the President. Despite the resignation, he remained at the head of the ruling Republican party.

The acting Prime Minister has appointed Karen Karapetyan, prompting a new wave of discontent of the opposition. The opposition leader Nikol Pashinian urged his supporters to again block the streets and continue the protest.

The ruling coalition of the country collapsed on April 25, when the nationalists of the “Dashnaktsutyun” refused Alliance with the Republican party. They explained their decision by the fact that the country has witnessed a political crisis.

The coalition with the “Dashnaktsutyun” provided the Republican party power over the national Assembly of Armenia, they controlled 65 of the 105 seats in Parliament. To elect the Prime Minister, need 53 votes.

Sargsyan held a constitutional reform. Armenia was transformed from a presidential Republic into a parliamentary one. The President and the Prime Minister for the first time chose not to direct universal suffrage. Instead, they chose members of Parliament.