The people of the Pleistocene epoch could hunt giant sloths — this is evidenced by human footprints inside the tracks of an animal found in North America, the scientists write in an article published in the journal Science Advances. 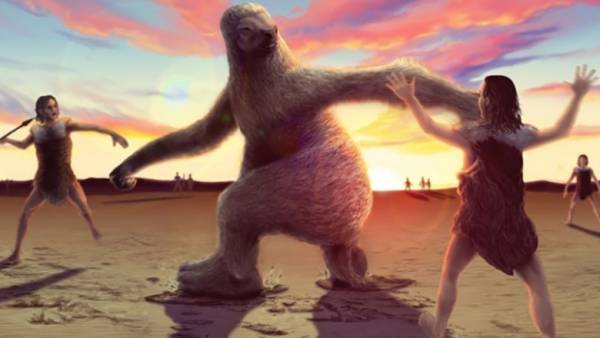 Giant sloths lived in North and South America and was a little similar to the now living descendants.

These large mammals lived on earth, had long and powerful claws and was comparable in magnitude with the elephants.

Discoveries of the remains of giant sloths indicate that the first people in America, the ancestors of the Indians, faced with these animals. In Santa Elina paleontologists have discovered jewelry made from the bones of giant sloths. For a long time the reason for their extinction was considered abrupt climate change at the end of the last ice age, but in recent years a new hypothesis, according to which people hunted animals, which led to their disappearance.

David Bastos (David Bustos) from the national Park Service, together with colleagues led the excavations on the territory of the reserve to the White Sands located in new Mexico. The researchers found a half-meter traces of ancient mammals, which are preserved in plaster of mud and silicic clastic rock — previously this area was a lake which dried up after the last ice age. The discovery was remarkable: the researchers also noticed in large prints animal other smaller.

The analysis showed that the smaller footprints were made by man. Scientists have discovered a chain of at least 10 traces that testify to the fact, that one of the old man followed in the steps of a giant sloth. In addition, at the end of the track, the researchers found a very different series of prints which indicate that the animal turned, stood up on his hind legs and brandished claws. Also on the ground traces of the second man who approached the sloth on the other hand, they were more “neat” and deep in the region of the toes.

According to paleontologists, the reserve is preserved evidence of ancient hunting. The man who followed in the footsteps of the sloth, was to distract the animal to another hunter approached him from behind. In favor of the assumption says that the footprints were fresh — that is not filled with water or sedimentary rocks and that giant sloths usually go at a relatively straight path, and only when there appear traces of human animals begins to dramatically change it, that was probably a protective maneuver.

However, scientists do not make definitive conclusions. Traces of people are not too well preserved, and in addition, the lake is fairly open territory, which is inconvenient for hunting. Therefore, the authors hypothesize that people could also chase the sloth in order to study its behavior.