Russian foreign Ministry: the US “crossed the red line and went beyond the bounds of acceptable and reasonable”

On Wednesday evening representatives of U.S. law enforcement agencies infiltrated owned by Russian building in Seattle, which until Tuesday was the residence of the Consul General of the Russian Federation. 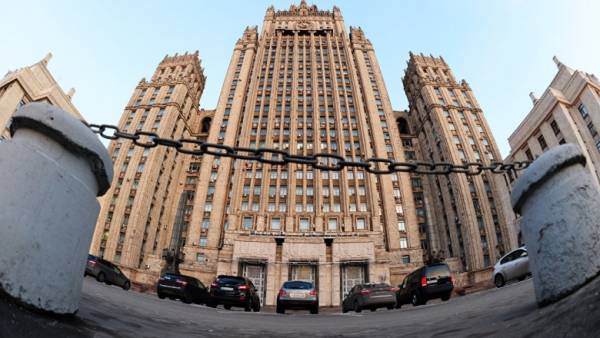 We will remind, the Russian diplomats, the U.S. government was given until April 25 to vacate the premises of the residence of the Consul General in Seattle. Employees of the Ministry of foreign Affairs of the Russian Federation (a total of 23 people, including family members) have used this room as a temporary headquarters after the April 2, they had to leave directly to the office of the Consulate General. The residence of the moved files and equipment, but on Tuesday its territory started a convoy of 11 cars, which carried people and property in the city, where Russia has left its Embassy — Washington, new York, Houston.

To deprive the General Consulate and the residence of the Consul General of Russia in Seattle diplomatic status and block access to them, the U.S. government decided in the framework of expressing solidarity with the Kingdom on “business Skripal”. In response to the attempted departure of the former double agent in the British city of Salisbury Washington on March 26 announced the expulsion of 60 Russian diplomats and close the Embassy of the Russian Federation in Seattle.

The Russian authorities intend to seek recognition of the decision of the US government about the closure of his mission in Seattle and five other Russian objects with immunity, illegal. To file a lawsuit in the U.S. the foreign Ministry instructed Russia’s President Vladimir Puti. n. “let’s See how the vaunted American judicial system,” he said on 5 September.

US special services are trying to enter Russian diplomatic property in Seattle pic.twitter.com/nVlCaL3lTL

At the request of Kommersant to comment on the chances of success through the us court review of decisions in respect of the Russian departmenet, Russian Deputy foreign Minister Sergei Ryabkov on Wednesday evening said: “it’s Not my job to evaluate these chances. This situation is absolutely unprecedented. It has no analogues and Parallels, not the fact that in our relations with the US, but in the system of international relations in General.”

Colleagues in Washington crossed the red line and went beyond the bounds of acceptable and reasonable. By their actions they are trying to create a reality that is completely unacceptable. As to this reality will concern the judiciary of the United States, is a separate issue.Sergey Raskovalova the Ministry of foreign Affairs of the Russian Federation

According to him, the Russian authorities “in fact, will experiment on the material that until now simply did not exist”. “We are 100% confident in their own right. We believe that the actions of the U.S. government and those who are trying to escalate the anti-Russian sentiment, are working on the destruction of the foundations of the functioning of the American legal system in the form in which we know it, — said “Kommersant” Sergei Ryabkov. In any case, we will continue to work on the assignment we were given by the President of the Russian Federation, and we will go to the end. Absolutely convinced that our arguments unkillable and based on a clear understanding of the basics of international and private law”.

Meanwhile, the question of “b” whether the US authorities to defend their case in court, a spokesman for the American Embassy in Moscow Andrea Kalan also said: “We are confident in the legality of actions, which we declared”. “The law on foreign diplomatic missions authorizes Secretary of state to require that foreign diplomatic mission refused to use any of the property. In addition, the Vienna Convention on consular relations provides that consular offices shall be established only with the consent of the host state. The United States has withdrawn its consent to the Consulate General of Russia in San Francisco and Seattle, as well as administrative buildings related to the trade missions of Russia in new York and Washington (D.C.)”, she said.