Moscow. April 25. INTERFAX.RU — head of the Ministry of defence of the USA James Mattis has again accused Russia and China of deliberately strategic confrontation between Washington and attempts to control the actions of other countries. 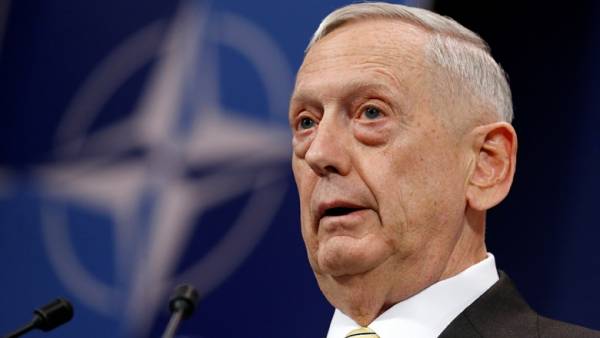 In particular, Mattis said that Moscow violated the Treaty on the elimination of intermediate-and smaller-range missiles (INF Treaty), and thereby undermined the confidence in its reliability as a partner.

“China and Russia have decided to be strategic rivals (USA — Interfax). They strive to create a world appropriate to their authoritarian models,” — said in a written certificate of Mattis, the Committee on appropriations of the house of representatives of the Congress of the United States.

“We strive to make sure that Russia returned to compliance with the Treaty, but the duration of violations of the INF Treaty by Russia shows that to make progress in the installation of arms control will be difficult, but also undermines the confidence of the USA in Russia as a reliable partner agreements”, — the document says.

In addition, the Pentagon accused Moscow and Beijing to “the desire to possess a right of veto for economic, diplomatic and defense decisions of other countries.”

Mattis previously dodged the question about the possibility of conflict with Russia and whether the conflict over Syria to respond to U.S. interests.