Sanctions against US taking a rapidly

The state Duma has prepared a response to “foreign States.” 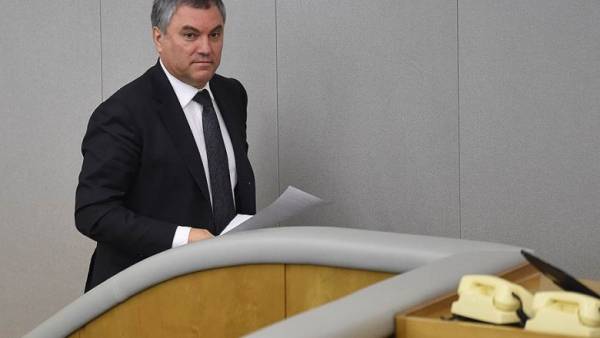 The leaders of the four Duma factions, headed by the speaker Vyacheslav Volodin in the Duma introduced a bill that gives the government the right to impose sanctions against the United States and other countries. The restrictions may relate to the supply of food, alcohol and tobacco products, medicines, cooperation in aircraft building and rocket-building industry. The plan document can be reviewed on may 8, but the deputies do not rule out an extraordinary review.

The authors of the bill “On measures of exposure to (counter) the unfriendly actions of the United States of America and (or) other foreign countries” have become the speaker of the state Duma and the leaders of four parliamentary fractions (United Russia, KPRF, LDPR and “Fair Russia”).

In the first article of the document stated that its purpose “is to protect the interests and security of Russia, rights and freedoms of citizens of the Russian Federation, prevention and suppression of illegal and hostile actions of the United States of America and (or) other foreign States”. The concept of “certain foreign States” the bill is explained as: “States that have made a decision on joining the U.S. actions and the imposition of economic sanctions against separate sectors of economy of the Russian Federation, Russian legal entities and (or) physical persons or support such decisions.”

What “actions” the US should join the countries that are at risk to fall under sanctions, and in what may be the “support decisions” the United States, the document is not explained.

The bill clarifies that sanctions are imposed regardless of existing restrictions against the United States and Europe.

The bill authorizes the government to use against the U.S. and “other countries” measures, including a ban on the import into Russia of agricultural products and foodstuffs, alcoholic beverages and tobacco products, medicines, suspension or termination of cooperation in aircraft building and rocket and space industry and others.

After today’s plenary session the state Duma goes on a two week vacation, and then begins the regional week and weekend of may. The next day, when the Parliament can consider the bill as planned on 8 may. On the same day, the state Duma can approve the candidacy of the Prime Minister.