The President hopes that cooperation in space is not affected by the policy. 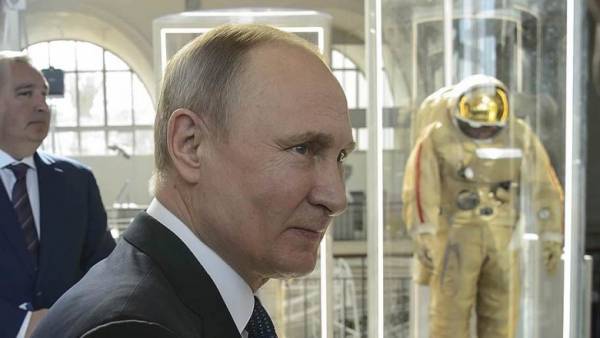 President Vladimir Putin visited 12 APR center “Aerospace and aviation”, where he talked with the astronauts, spoke about the plans for deep space exploration and explained why Russia is not going to come out of international space programs. Cosmonautics Day was a time for memories: Mr Putin pointed out that before the pavilion was preparing seedlings for planting on Mars. But more explicitly on the program of lunar exploration.

Vladimir Putin during the examination of the exhibits of the pavilion “Space” was accompanied by those involved in the space industry (Vice-Premier Dmitry Rogozin, the head of Roscosmos Igor Komarov), and the mayor of Moscow Sergey Sobyanin. With the last President tried out a simulator for an aircraft, the President, and after him and the mayor got inside and made maneuver “docking” module of the space station. Together with Messrs Rogozin and Komarov Mr Putin inspected a number of exhibits: in particular, the lander of the spaceship “Vostok-1”, which landed cosmonaut Yuri Gagarin, and the exposition dedicated to the International lunar program.

The astronauts arrived at ENEA to talk with the President, Vladimir Putin stated the necessity of preserving international projects.

Thank God, this field of activity (space cooperation.— “B”) does not affect the problem areas of the policy, so hopefully things will develop. We’re not here to break, to get out of these programs, we intend to finish.

“We are there as partners and the moon and then to Mars, where the United States, Canada, Japan, the European Union”. The astronauts said that they with their partners from other countries instead of flying on some ships, together risk. “This is the sphere of activity which unites. I hope it will be so in the future”, — said Mr. Putin.

The astronauts asked him about whether there will be a Russian mission to the moon. “You know that the program is calculated till 2030. Already completed work on the creation of the ship “Federation” (development of the Corporation “Energy”.— “B”) and began work on super-heavy rocket (agreed technical specifications.— “B”), which should be used for work on the moon. So there is no doubt, will actively work, this programme will implement, — said Putin.— First station in lunar orbit, and then modules on the moon, anyway, so planned. I hope that it will be so”. And asked, whether I want to go to the moon? Without hearing the refusal, Vladimir Putin said that there “and to Mars close”: “somewhere here (in the pavilion ENEA.— “B”) previously prepared the tree for landing on Mars, the seedlings were sold.”

According to “Kommersant”, these seedlings and was linked to the idea of creating at ENEA “permanent exhibition”. As said the source “Kommersant”, involved in the establishment of the centre “aviation and space”, in 2014, Dmitry Rogozin has noticed that the pavilion “Space” does not correspond to its name because everything is “obsolete and outdated” (including the Martian seedlings). He instructed his Deputy Ivan Kharchenko to create a working group to consider options for the establishment of the new exhibition, as well as to determine its content.

Soon misters Rogozin and Sobyanin has sent Vladimir Putin a joint letter with the corresponding offer. The President endorsed the initiative, after which the defense enterprises were instructed to bring in the exhibited form of samples, models and models of space-rocket and aviation technology. Some of the exhibits (missile launcher “Topol” from the transport-launch container, the su-27, launcher 9А83−1 air defense system s-300 anti-aircraft self-propelled unit 2С6М “Tunguska”, a fighting machine 2A6 “Shilka”) had to be demilitarized. Brought them at ENEA according to the instructions: at night, on special tools, with the support of traffic police, with the rise of networks.