Moscow. April 12. INTERFAX.RU. The measures of the Russian authorities to support the companies came under another round of sanctions by the US, will not be compensation to their owners, and in maintaining production, said Prime Minister Dmitry Medvedev. 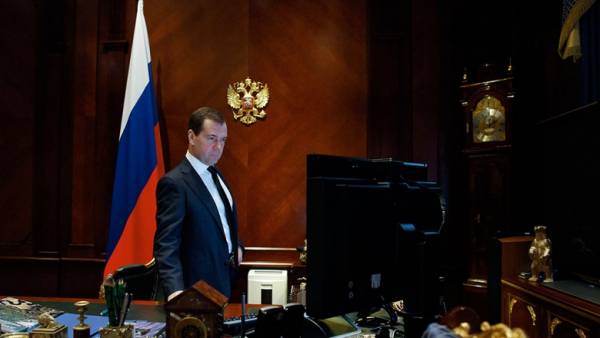 “The decisions that will be offered as support are not aimed at compensation for losses of owners, although it is also necessary to keep in mind, sometimes it is present, and, above all, on preserving the businesses and jobs”, — Medvedev said on Thursday at a session of the state Commission for import substitution.

According to him, this is because under the impact of economic sanctions first and foremost are the ordinary people. “Be strategic, strategic enterprises, whose successful operation depend on tens of thousands of people”, — said the head of government.

“Those companies that got into a difficult situation, should receive support. Instructions on exploring this kind of support I have given, this applies to different companies and metallurgists, and engineers, and defense industry, and some other”, — Medvedev recalled.

On Friday, April 6, the U.S. Treasury announced that, after consultation with the state Department, the us administration imposed sanctions against seven Russian businessmen, 14 companies, 17 government officials of the Russian Federation.

The business in the “black list” was made the Chairman of the Board “Gazprom” Alexey Miller, businessmen Viktor Vekselberg, Igor Rotenberg, Oleg Deripaska, Suleiman Kerimov, Andrei Skoch and Vladislav Reznik, the head of Gazprombank Andrey Akimov and head of VTB Andrey Kostin. The sanctions imposed to the General Director “Surgutneftegaz” Vladimir Bogdanov, Board member of “SIBUR” Kirill Shamalov.