The American Ambassador remains without an interpreter 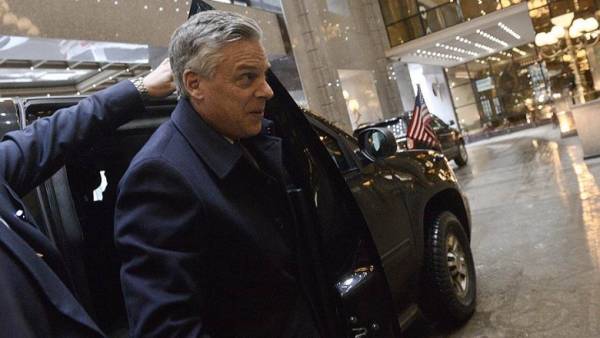 Early Thursday morning the U.S. Embassy in Moscow left 60 American diplomats expelled from Russia in response to similar measures taken by Washington. According to “Kommersant”, among them was the policy division of the Embassy at full strength. The group expelled diplomats were also personal interpreter of the Ambassador and press Secretary of the Embassy. Kommersant’s source close to the state Department, called Moscow’s decision on the composition of the expelled group “unfair.” Sources “Kommersant” in the government of the Russian Federation assured: all sent “actually worked for the CIA, the national security Agency and the intelligence Directorate of the Ministry of defense of the United States”.

The buses began to shrink to the U.S. Embassy at four o’clock in the morning. The Embassy, they left at 6:30. From Russia diplomats flew a special Charter flight.

According to “Kommersant”, in the group of 60 expelled the staff of the Embassy joined the whole policy division, including its Director Chris Robinson.

As stated on the website of the diplomatic mission, “the political section is engaged in bringing to the attention of the Russian government the US position on foreign policy and security, as well as inform Washington about the main provisions of foreign and defense policy of Russia”. “In addition, the staff of the political Department of the analyze and give opinions on important events and trends of Russian political life (including elections, political parties, relations between the centre and the regions, the media situation, the issues of human rights) in light of their impact on Russian-American relations”, — specified in the description. The Department structure consists of three groups: foreign policy, political-military Affairs and domestic policy.

“The expulsion came all those who were engaged in Ukraine and Syria, and those who supervised questions of strategic stability, — said one of interlocutors “” close to state Department.— Don’t know who the Ambassador will now be based”.

Another American source “” called Moscow’s decision on the expulsion of the entire Department policy “unfair.”

In addition, according to him, the Ambassador lost his personal interpreter.

Earlier media reported that the group expelled diplomats became the press Secretary of the Embassy of the United States Mary Olson.

We will remind, the decision of the authorities of the Russian Federation on the expulsion of American diplomats and the closure of the U.S. Consulate General in St. Petersburg was a response to similar measures announced on March 26, Washington. Then the administration of Donald trump as a sign of solidarity with Britain in the “case Skripal” said 60 on the expulsion of Russian diplomats and the closure of the Consulate General of Russia in Seattle. Among the deportees was the first time and 12 employees of the UN office. In an interview to “Kommersant”, the U.S. Ambassador in Moscow John huntsman said that these measures aimed at including and to “protect American citizens from espionage by Russia.” According to him, among the deportees there were many employees of the Russian special services.

Former Russian Ambassador in the United States, the first Deputy Chairman of the Federation Council Committee on international Affairs Sergei Kislyak, in an interview with “Kommersant” declared named Washington’s action “unprecedented” and “extremely stupid”. “Americans got a mirror response. Their diplomatic machine we have as a result the work has not become easier. And who won from all this? This is political posturing, which ultimately backfire and American interests, too,” he said.

The Kommersant’s sources in the government of the Russian Federation assured: all expelled from Russia, the Americans “actually worked for the CIA, the NSA and the intelligence Directorate of the Ministry of defense”. The us state Department deny it.

State Department spokesman Heather Nauert called the Russian side declared measures “unjustified”. However, as stated by the press Secretary of the President Dmitry Peskov, Moscow does not agree with this wording: “Russia was forced to take steps in response to those unfriendly, unconstructive, illegal actions, in this case involving the expulsion of our diplomats and the closure of consular offices committed by Washington.”

According to Heather Nauert, Russia is behaving in the situation of “case Skripal” as a victim, although it is not. However, the state Department gave to understand that Moscow might send to Washington and new York new diplomats expelled in return. A Kommersant source in the Russian foreign Ministry confirmed that the American side is entitled to request accreditation.