Putin met with the new head of the Kemerovo region

MOSCOW, 5 APR — RIA Novosti. Russian President Vladimir Putin discussed the main issues of development of the Kemerovo region with the new acting Governor of the region Sergey Tsivileva. That, in turn, assured that in Kemerovo work with each family affected in the fire at the Mall, “Winter cherry”. 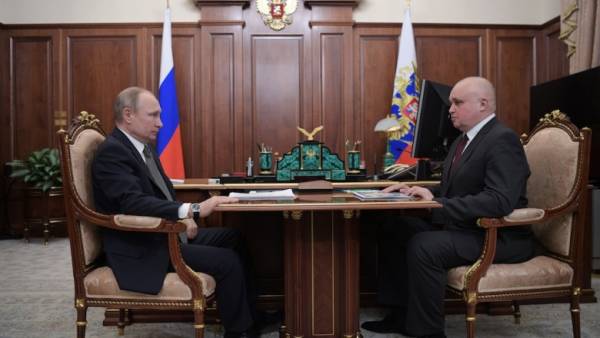 “You had a chance to join in the position of acting head of the Kemerovo region in difficult times, we can say, even in a critical situation, but it should you set to work effectively is to set up and even to mobilize all your positive qualities, and you have enough of them, you showed them in various places very, very well”, — Putin said at the meeting with Civilian.

The Russian President expressed hope that the inhabitants of Kuzbas will feel the specified characteristics of the new acting when he fully start to work.

Putin said that the government estimates the efficiency of the regional teams are on 73-m a place in the whole of Russia. “I mean, it seems like not such a big indicator, but there are clearly positive trends in the situation today: is self-sufficiency in finances, persistent very stable financial policy of the former government and the former Governor. All this is a good start in order to operate effectively in the short, medium and longer term”, — said Putin.

He stressed that Kemerovo is a recognized leader in commercial development of coal and metallurgical industry full cycle.

Tsivilev for its part noted that the main potential of the Kemerovo region is the people.

“Now we have to do, to work individually with each family to provide assistance to all those affected in this tragedy. At the same time we are committed to ensure this tragedy is never repeated”, — said Tsivilev.

Russian President Vladimir Putin said that in recent years — last year and early this year — there has been a steady growth of industrial production, foreign trade figures.

Putin stressed that in addition to industrial production and economic development “should definitely pay attention to social issues”.

“One of them, I know what you’re going to raise this issue is the resettlement of people from dilapidated housing. We deal with this issue, doing all the time, unfortunately, not as rapidly as we would like,” said Putin.

He noted that during the previous two years from the Federal budget allocated in Kemerovo 1.6 billion, settled approximately 901 family, but needs much more. The President asked the acting head of the region to pay attention to it together with the government entity. “The government of the relevant instructions will be given,” he said.

Another important subject the President called the health care. “Unfortunately, in Kemerovo, we see a growing problem with infectious diseases and tuberculosis. Don’t want to say it, but it is necessary. Because if we’re not going to talk about it, then we won’t understand what you need to work. This means that you, together with the government, and I’m sure the corresponding assignment also the Ministry of health will formulate, will need to deal with these problems, and to do as quickly as possible. I mean not only TB but also HIV infection,” — said the Russian leader.

Putin noted that another important issue is the road network. The road density in the Kemerovo higher than in Russia, and also higher density of Railways.

“People are working very hard, but that’s another issue — the income level of the population is, to put it mildly, very modest. So all you need to do in order to participants in economic activities, and administration to encouraged to in the social sphere and in the sphere of economy the wage level is gradually increased. You couldn’t do it, nobody can do in Russia voluntaristic methods. You need to do it through economic, market, but the groundwork for such definitely — referring to the successful development of major industries in the Kemerovo region — it is”, — Putin said.

He urged the acting head of the region can devote time to the subject of single-industry towns, which in the region more than in other regions of Russia. Putin noted that to solve this problem need it’s complex, most of which is to diversify the economy.
Tsivilev also said that Kemerovo oblast is a unique region, the region of the six seas, through terminals that are there, sold products subject to export. Moreover, the region is a strategic partner of Russian Railways, providing 38% of freight turnover.

“We want to make the Kemerovo region became prosperous region. It is a great platform to develop modern technologies for production and processing of coal and coal chemistry. Indeed, the potential of the Kemerovo region is huge. We intend to do everything in order to Kemerovo oblast became the leader of Russian economy”, — said Tsivilev.