Poisonous legacy. Who got the chemical weapons of the Soviet Union

MOSCOW, 5 APR — RIA Novosti, Andrei Kots. Close your eyes, hold your breath, to get rubber helmet mask from the bag and put on the head — according to army regulations on everything has no more than ten seconds. These requirements — from the time of the First world war. 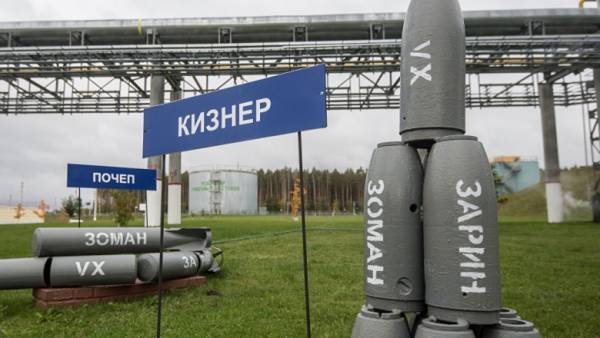 Exactly 90 years ago, the government of the USSR ratified the Geneva Protocol on the prohibition of the use in war of asphyxiating, poisonous or other similar gases and of bacteriological methods of warfare. However, the production was not forbidden. After 1991, throughout the vast territory of the former Soviet Union left many warehouses and factories. About where it is prepared “fighting the poison” — in the material RIA Novosti.

To work on creation of chemical weapons in Russia began in 1915. It was a symmetrical response of Germany, actively spraying poison gas on the battlefields of the First world war. Quickly built three factories in Ivanovo-Voznesensk, Moscow and Kazan. By the spring of 1916, the army received about 150 thousand chemical shells, and by the end of the year, the company synthesized nearly four thousand tons of liquid chlorine, chloropicrin, phosgene and sulfurylchloride. However, EN masse, the Russian side gases are not used, they were too “cranky” and dependent on the weather. Good old artillery shells with the usual gear was more efficient.

In the USSR chemical weapons since 1925, was engaged in a Military-chemical management of red army. The second world some slowed down progress in this area, but during the cold war and the arms race, the Soviet Union and the United States massively accumulated stocks of chemical warfare agents. By the 1990s in the Soviet Union there were almost 40 thousand tons of chemical weapons (more than four million artillery and rocket munitions). This huge Arsenal of 80 percent consisted of nerve gases sarin, soman, VX, and others. The rest of the inventory agent skin-blister agents lewisite and combined mustard-lewisite (HL).

In post-Soviet Russia all the chemical weapons stored in seven well-controlled enterprises arsenals: in the cities of Kambarka (Udmurtia), Shchuchye (Kurgan oblast) and Pochep (Bryansk oblast), towns Mountain (Saratov oblast), Leonidovka (Penza oblast), Mirny (Kirov region), Kizner (Udmurtia). The government decided to get rid of the deadly cargo, and on 2 may 1996, President Boris Yeltsin signed the Federal law “On destruction of chemical weapons”.

In Leonidovka, Shchuchye, and Pochep and Kizner had to build additional plants.

In September 2017 the President of Russia Vladimir Putin gave the command to destroy the last himbeereis by teleconference with the plant “Kizner” in Udmurtiya. The projectile with VX nerve gas disposed of in the live. The President called it a historic event and stressed that Russia had fulfilled its obligations to destroy chemical weapons ahead of schedule. On the basis of plants involved in recycling, to launch production. “Kizner”, in particular, will produce the powder.