“His words can be seen as a message to Washington” 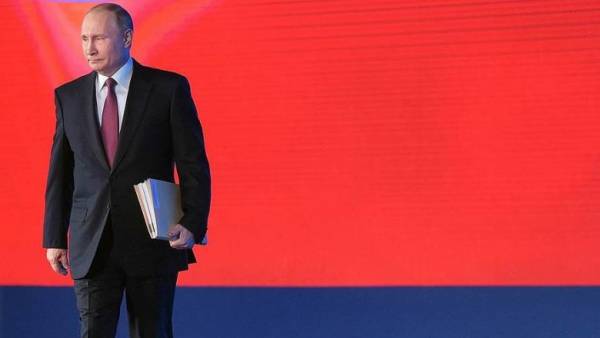 Putin’s speech, which began with the enumeration of the internal projects, quickly turned into a hard retelling of the conflict between the East and the West and praise the achievements of Russia’s Arsenal, such as a cruise missile with a nuclear engine that can hit a target anywhere.

Putin did not indicate any ally of Moscow, whom she will protect…

His words could be seen as a message to Washington at the deteriorating relations (between two countries), including investigations in the USA concerning the Russian interference in the presidential election of 2016.

While the previous messages were peaceful events, arranged in a decorated St. George hall of the Kremlin, this year the event was moved to the exhibition hall of the Manege, that has allowed Putin to use video and animated graphics on a huge screen…

New weapons were shown in the form of computer animation bypassing of the protection system during flight to the target, which was, as at times it seemed, and North America.

The message is his first major political statement since the formal start of the presidential campaign. 65-year-old Putin almost guaranteed wins at the fourth and probably the last election that will prolong his power until 2024…

Under a burst of applause, Putin said that the new technology was created, despite skepticism from other countries about Russian possibilities…

In the speech, which lasted nearly two hours, he also promised to improve the lives of Russians, ‘ halving poverty, increasing pensions and creating new kindergartens. He also called for increased spending on urban infrastructure… Details about how will be financed the promise of their expenses are not.

When before the election March 18 is less than three weeks, it Putin, which the Kremlin moved from December really is a nail to his campaign… But instead to report the details of potentially conflicting plans for reform of the pension system and tax system, Vladimir Putin has focused on large public investments in health, roads and education.