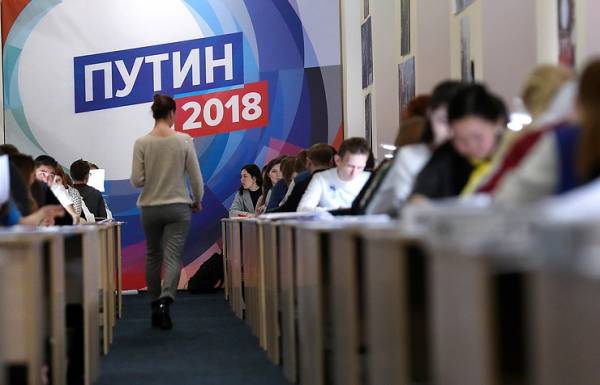 MOSCOW, March 1. /TASS/. Nearly 70% of survey participants, conducted by the Russian centre for public opinion studies (VTSIOM), the Russian presidential elections are ready to vote for the incumbent head of state Vladimir Putin, who is running as self-nominated candidates. Sociologists also note that the increased intrigue of the fight for second place in the upcoming elections.

During the poll, held from 19 to 22 and from 24 to 26 February 2018, respondents were asked for whom they would vote if presidential elections were held next Sunday.

The leader of the ranking

“As of February 19-26, to vote for Putin in the presidential election ready for 69.1% of Russians”, – stated in the TASS research.

According to the previous survey for the 12-18 February, to vote for Putin in the presidential election were ready 69.5 per cent.

“The index of the candidate-the leader is under the corridors of values: the level of electoral support of Putin based on the data for each day in the second half of February remains within a narrow range 67-72%”, – concluded polls. It is also noted that “fluctuations in the figure are wave-like in nature.”

The intrigue around the second place

While VTSIOM notes that “the intrigue of the fight for second place intensified”. “Increased ratings [the Communist party candidate, businessman Paul] Grudinina, [LDPR leader Vladimir] Zhirinovsky [the presenter, the candidate of the party “Civil initiative Ksenia] Sobchak”, – stated in the materials.