The Church split. As Russian patriots did traitors and spies

One of the most tragic episodes of our history began with insulting religious and national feelings of an impressive group of people, which then called the old believers. 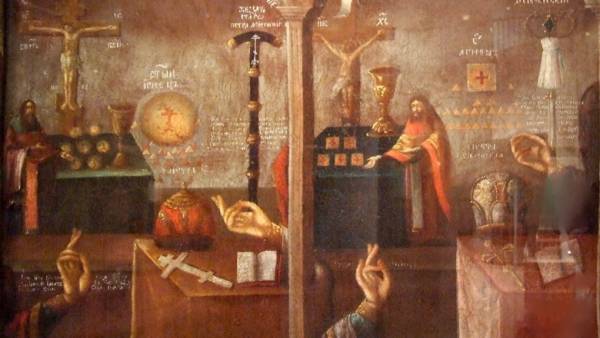 365 years ago, in 1653, the Great lent began at about the same time as now — in the last week of February. He started with a big surprise from the head of the Russian Orthodox Church — Patriarch Nikon. On February 22 the Moscow temples received his order to use troebortnoe the sign of the cross instead of two fingers. So began the famous and still not eliminated the schism.

Not obsolete, although some steps towards a rapprochement and taken from both sides. But too bad was heat, there was too much blood, perjury and outright betrayal to everything we discard and forget. It all started, we think, with the little things.

The devil is in the details

As you know, the changes introduced by the Patriarch Nikon, was concerned with the ceremonial aspects: “it is Not proper in the Church throwing do on the knee, but the waistband would you do the bowing; and the three fingers would Yeste was baptized.” Also changed the spelling of the name of Christ — is Christ now supposed to write Jesus. Is that in full view of everyone. Now the rest will note only the one who often goes to Church. For example, the fact that the altar bypassing not “posolon” — following the movement of the Sun, and “Widdershins” — on the contrary. Or that the exclamation “Hallelujah” is spoken during the service three times, not twice like it used to. A logical question arises — and it should even make an ugly quarrel with the serious consequences of these here things?

The people of the mid-seventeenth century decided that it was worth. It’s not even in the little things as such. And in the political and national background. According to the plan of Nikon, the Russian liturgical books should be corrected by Greek models. This was perceived as a direct insult, which carry no way.

By the time the Greek Orthodox Church is two hundred years eked out an existence not just miserable, and extremely humiliated. After the conquest of Byzantium by the Turks and the fall of Constantinople she would disappear in General, if not constant Russian financial support. In addition, in Russia akin to the idea that Moscow — the Third Rome. The first Rome fell because of the sins. The second Rome — Constantinople — he paid again for the sins. Moscow — the Third Rome, the new capital of Orthodoxy. From Moscow comes the light of the true faith. Everything is logical, Patriotic and clearly.

And then suddenly told to make a “left turn” and change Russian worship according to the Greek model. Brothers, Yes it’s a direct act of treason.

The funny thing is that a much more radical reform of worship took place in the XIV century. Just in time for the most revered Russian saints — Sergius of Radonezh. In those years Russia after Constantinople passed from the Studite liturgical rubrics in the Jerusalem Typicon. The differences between them were much more serious than those introduced Nikon. And — nothing. Went without a hitch. A disciple of St. Sergius of Radonezh Athanasius Vysotsky went to Constantinople to translate the new Charter. And no one thought the transition to the “Greek track” shame. For the simple reason that Constantinople was then, though levied by the Turks on all sides, but kept still and strength, and glory. To learn from him was not shameful. And now, nearly three hundred years later, appeared to be offensive and even dangerous. How so? Greeks the Lord for their sins punished by the Turkish invasion, and now we have something to learn?

Interestingly, the leaders of two Church groups, you might say, the personification of the Church and mainstream Church schism were people very similar. Patriarch Nikon and Avvakum. And similar they were in all. Until it is born, albeit with a difference in 15 years, but practically in the same place. That’s what Habakkuk wrote about his elder colleague:

We Nikon the IP of those places… I was born from the priest, and Nikon — in the village between Murashkina and Lyskova, I know him, his father Cheremisin, and mother — the mermaid (Russian). Minka Yes Manka his parents.

Such attention to the origin and nationality of the Nikon was justified. Many dissenters considered him the Antichrist. And honest Habakkuk, even though he was the ideological enemy of the Patriarch, their co-religionists were corrected: “the anti — Christ is from Galilee, from the tribe of Dan, from the wife-Jewess”. That is, the Nikon, being half-Russian, half Cheremisina (Mari) on the role of the Antichrist, according to Habakkuk, not to pull.

In addition to the common homeland, the leaders of the Church groups had common views. For example, both hated drunkenness and eradicated it in priestly environment. Nikon — relying on the administrative resource: “of the Patriarchal archers permanently bypass the city, and as soon as you meet a priest or a monk drunk, immediately take him to prison and subjected to every reproach… “. Habakkuk — a fiery sermon: “Wise men, yeast sour, the book is written with shaking hands, crawling drunk on the ground, like reptiles… Propolisa with a hangover, and by itself soromno and ashamed: beard and mustache in his vomit, and the whole guznov and toes to govnah, grace-bowls head spin”.

Moreover. At first they were colleagues and even friends. Both sincerely believed that Church reform is necessary and that without it the Church will soon be in trouble from disorganization. Both believed that to remedy the situation we must first fix the Statute of worship and religious books.

The only difference in the samples in which books can be edited. The position of Nikon, we already know. Becoming Patriarch in 1652, he disbanded the Russian state “Book right” and replaced it with poles headed by Arseniy Greek. Among the resignations “correctors” was Habakkuk, who believed that the model should be ancient manuscripts.

One of them was “really” right and who is not — everyone solved independently. And then, too. The position of Habakkuk seemed nicer — still without “depraved Greeks,” or as we would say, without “>”, relying on its own strength and national Holiness.

The result was lamentable — all the following major riots and popular demonstrations relied on the followers of Avvakum. Power to such an extent afraid of radical believers that crushed and destroyed them and nearly three hundred years later. In fact, a well-known writer Mikhail Saltykov-Shchedrin his career at the Ministry of internal Affairs did as an “official for special assignments” investigating the case Sarapul dissenters who suspected almost spying powers hostile to Russia.