MOSCOW, 23 Feb — RIA Novosti. President Vladimir Putin in St. George hall of the Kremlin awarded the Gold Star of Hero of Russia the relatives of the deceased in Syria major Roman Filipov. 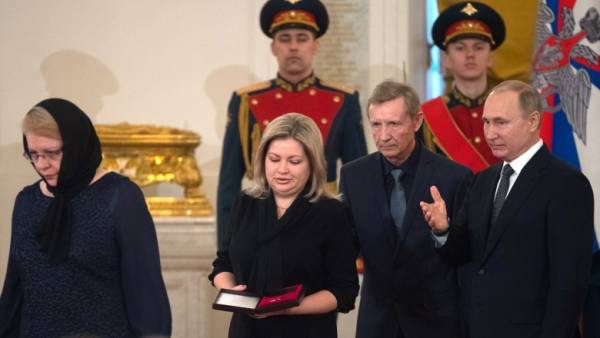 The head of state gave the award to the widow of the pilot Olga Filipova and his parents — Nikolai Serafimovich and Elena viktorovne.

He noted that the Roman Filipov entered into an unequal battle with the terrorists, but gave up and retreated.

“We have every right to compare him with the heroes, the defenders of the Brest fortress, defenders of Moscow and Stalingrad. Because regardless of historical context, regardless of time in which we live, human life of earth is only one. And if people are willing to go to the end, to sacrifice themselves in the interests of its people, it is the highest expression of courage and heroism, devotion to his country,” — said Putin.

In addition, the President awarded and other awards. Southern military district awarded the order of Suvorov, aircraft-carrying cruiser “Admiral Kuznetsov” — the order of Ushakov and the guards missile cruiser “Varyag” — the order of Nakhimov. The order will consolidate on the banners of military units.

Major Filipov was killed near the settlement of tel-Debes in Syria on 3 February, when circled over the areas of de-escalation “Idlib”. The militants hit him with a su-25 attack aircraft from MANPADS. The pilot was trying to keep the plane in the air and had to report to command about the attack, and then ejected.

On land, they clashed with the terrorists and was seriously wounded. When the fighters finally surrounded him, he blew himself up with a grenade. The pilot was buried on 8 February on the walk of fame Kominternovsky cemetery of Voronezh.

Vladimir Putin on 6 February awarded him the title of Hero of Russia.